Monday morning I went to the Marijuana company and had an interview, over the internet, with an extremely nice doctor. He figures the pain in my legs is due to my back problems? He was quite positive. I wonder why no-one else figured that? Anyway I then came home and had to register with an actual supplier. It will, apparently, be around 5 business days before I can hope to receive any.

On the way home I stopped at the Rising Dough to buy some Cornish Pasties and some scones. I recently heard a story, on TV about Cornish Pasties. Apparently they were first made this way for the tin and copper miners in Cornwall who didn't have time to come back up the mine to have lunch and they used to take these "complete meals" with them and because their hands were dirty and full of copper or tin they would hold the pasty by the crimped pastry, eat the rest and throw away the crust. By that time the  crust was somewhat poisonous and the rats would eat the crusts and die. In the bakery today they told me that the pasties originally were made with apple pie filling too, in other words there were 3 sections in the one pie, meat, veg, pie.

Whoopee my toaster oven has arrived. I had forgotten they said they would be sending one with a rotisserie too. Unlikely I will ever use it mind you.  It toasts something like 9 slices of bread. Can't see me needing that either. I find the rotisserie chickens from the store are excellent although no doubt it is not the cheapest way to buy them. I guess I might do it just for the hell of it, once, then again I might not - clean up comes to mind. Still I can now do myself a cheese on toast, which I didn't want to try in the air fryer.

Corn is coming into season in Ontario at the moment so this is an appropriate recipe if you want to use fresh ingredients. Of course fresh shrimp from the sea would be nice but beggars can't be choosers. 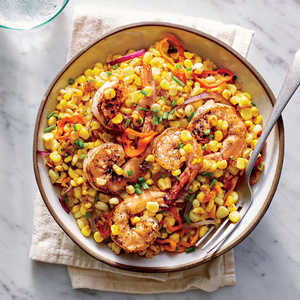 that pops with fresh flavor. A little white wine vinegar balances the sweetness of the caramelized veggies and also complements the shrimp.

1. Combine salt and 1 quart water in a medium bowl, stirring until the salt dissolves. Add shrimp to brine; cover bowl with plastic wrap. Place in refrigerator for 30 minutes.

2. Heat a large cast-iron skillet over medium-high. Add corn, bell pepper, and onion; cook 5 minutes or until vegetables are lightly charred and tender. Place corn mixture in a large bowl. Stir in chives, vinegar, and oil.

3. Wipe skillet clean; return to medium-high. Remove shrimp from brine; pat dry between paper towels. Sprinkle shrimp with chili powder. Add shrimp to pan; cook 1 minute on each side or until done. Serve shrimp with salad.