I'm sorry but for a 19 yr old to be able to obtain an Assault Rifle means there is something wrong in the nation. I notice that President Trump is completely ignoring people who call for gun law revision. I feel so very sorry for all the parents who have lost their kids and for the relatives of the teachers who died saving them. But this keeps happening. For goodness sake, do something to stop it.

Birgit of BB Creations suggested I should eat bland food because I have had stomach problems. Great idea. Maybe I should follow it, but two days running we had the Sicilian Olive Chicken and then today we went to Mandarin for Matt's belated birthday lunch and I stuffed myself stupid on dumplings and other things - very sensible of me. Tonight I just had a bowl of home made tomato soup but then that's all I could face after lunch. By the way, Mandarin was absolutely packed. None of us have ever seen it like that. I don't think there was an empty set there. I don't know why it should have been so busy but it was so bad we had trouble getting the bill. One of our party said we could walk out and they wouldn't notice. I don't think he was wrong. Normally they have someone offering a mint on your way out, not today, the mints were there. We could have taken one but I don't much like them. Our minimum wage has been increased and so we wondered if they had let some of the staff go. Apparently quite a few places have.

I think I mentioned buying a new tablet the other day, it was an RCA Voyager. However, it didn't seem to be working properly so I took it back. I have now ordered a Kindle Fire 7 from Amazon.ca which is not their newest but should do for me. I don't use it a whole lot. I do have one of the original Kindles but it is not really any good for anything much more than reading or storing documents which I don't really need.

We went bowling again after lunch and guess what, he beat me in the second game again. I nearly left him there LOL.

I'm not sure how authentic this recipe is, but it does look and sound good. I must say I have never made Chicken Biryani from any recipe but I really must try this one. I am trying to use a lot more spices such as these as they are supposed to be good for mental health which, bearing in mind the lack of Alzheimer patients in Asia, is fairly well documented.

A standard in Indian cuisine, biryani gets plenty of flavor and fragrance from the spice mix, which typically includes turmeric, cardamom, ginger, and cumin. We use basmati rice here, which is a delicate white rice with an almost floral aroma. We particularly like Royal brand basmati, which has 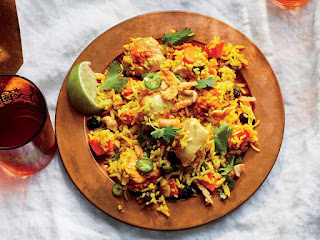 1. Stir together yogurt, turmeric, cumin, and red pepper in a large bowl. Add chicken pieces; toss to coat. Cover and chill 2 to 4 hours.

3. Remove chicken from marinade; discard remaining marinade. Place chicken in an even layer on rice mixture. Cover and increase heat to high; bring to a boil. Reduce heat to medium-low, and simmer until chicken is done and rice is tender, about 15 minutes. Remove from heat. Remove and discard cinnamon stick. Let stand 5 minutes. Stir in cream.