Talk about mixed up, I noticed yesterday, in one reply I used both American and British/Canadian spelling. I noticed typos too but the less said about those the better! It is difficult for us in Canada because we read a lot of both types of spelling and, I certainly, get confused as to how some words are spelled. There is a store here, called Canadian Tire, when we first arrived here 40 some years ago, I mentioned the store to English friends, in writing, and they laughed because I was spelling Tire the American way and not the English way, tyre. Of course that is the name of the store anyway. Not only that, things are called differently by use, like leash for a dog which in North Carolina and the UK was usually a lead.

League bowling today and not only did I not bowl well, I ended up losing a point in my average. Matt bowled pretty well though and gained a point, the one I lost maybe, LOL. Not only that, the team we bowled against included the woman who is my "rival". We had a few laughs out of it. She added insult to injury by having a 200 game. The highest I got was a 161 which was pretty pathetic. I guess I can kiss my ladies' high average goodbye. One of our team is not a very good bowler but astounded us by getting several strikes and spares today.

Enchiladas and such are not normally my choice of eating, but this recipe appealed to me, mind you I think it might be a lot spicier than I am used to.

Put out your favorite toppings for these quick and healthy layered enchiladas. We like cilantro, sour cream, guacamole and jalapeños. 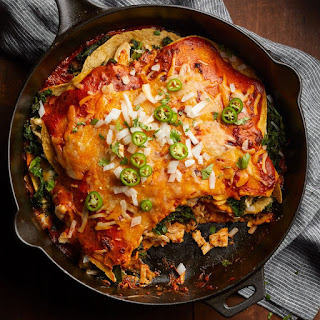 1. Preheat oven to 450°F. Heat oil in a large cast-iron skillet (12-inch) over medium-high heat. Add kale and water; cook, stirring, until bright green and wilted, about 2 minutes. Stir in chicken, cumin, salt and pepper; cook for 1 minute more. Transfer to a large bowl. Combine enchilada sauce, sour cream and chipotles to taste in a small bowl. Spread ½ cup of the mixture in the pan. Place 4 tortillas over the sauce, overlapping them to cover the bottom. Top with half the chicken mixture, ¼ cup onion and ½ cup cheese. Layer on half the remaining sauce, 4 tortillas, the remaining chicken, ¼ cup onion and ½ cup cheese. Top with the remaining tortillas, sauce and cheese. Bake the enchiladas until bubbling, 12 to 15 minutes. Sprinkle with the remaining ¼ cup onion before serving