Denise of My Life in Retirement, set me off thinking more about the English language. There is a heck of a lot of difference between Northern and Southern England and many of the names they use for things are quite different. Denise mentioned a bridie, very northern and virtually the same thing in Cornwall becomes a Cornish Pasty or even, locally, an oggie. Matt's dad came from the north and had lots of words I had never heard of such as cuddy for a pony, klarts for mud, cracket for a 3 legged stool. He had been in the south long enough to
lose a lot of his accent, but if he wanted to he could really turn it on and was quite incomprehensible to us poor southerners. I remember my first husband saying he worked for 3 years with a guy from Newcastle and still didn't know what he was saying. I presume they would find us just as difficult to understand. Then of course there is Welsh, Irish and Scottish all of which have their own accents as well as speaking the Gaelic. I have heard people say the Irish use the punt as currency, no they use the pound (or did) but the way they pronounced it, it sounded like punt. Although, compared to the Americas, The British Isles is a very tiny area, it has also been inhabited for a very long time and also overrun by various peoples up until 1066 which was the last time Britain was invaded. However, all these people brought their own languages which affected what was spoken. I always remember that in the first chapter or so of Ivanhoe, two characters were discussing how animals changed their name from when they were alive to when they were presented at table. Meaning they were called by their Saxon names whilst being herded but by the French names on the table. Swine to porc is one example. I don't have a copy of Ivanhoe (I used to once) any more so can't check.

Talking of Ivanhoe, I realised the other day I have some books such as The Complete Works of Lewis Carroll and the same of Milton which were given to me as a child in 1950 or so and were printed even earlier. Checking it out I actually have quite a few old books, but I had forgotten about them over the years. I am wondering if they have any value. They are not, of course, old enough to have any real value, but there might be some. I have since heard from the bookstore and one thing they specify is dust covers! I don't even remember if they had dust covers, they sure don't now.  So I guess that's the end of that.

So I had to give you a recipe for Cornish Pasty - mind you I buy them in a Scottish Bakery in the next town over. Had a couple for supper tonight, very good.

Cornish pasty is a treat that everyone loves! This classic Cornish pastry recipe is a traditional bake that's great for using up leftovers and takes no time at all. The Hairy Bikers' delicious Cornish pastry recipe, which is from their brilliant 'Food Tour of Britain' TV show is warming, filling and delicious. Learn how to make your own pastry and fill with the traditional Cornish filling with this easy-to-make recipe. Perfect for picnics, parties or just a nice lunch with the family. This recipe makes 6 Cornish pasties and will take around 1hr and 10 mins to prepare and cook. This hearty classic is sure to become a family favourite and keep everyone happy and full when it comes to eating them. If you 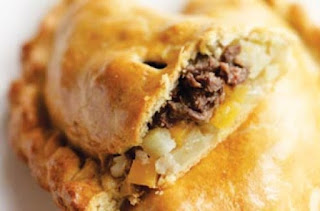 have any leftover pasties, leave to cool thoroughly and then store wrapped in clingfilm in the fridge.

1. To make the pastry: Place the flour, baking powder, salt, butter and egg yolks into a food processor and blitz until the mixture forms crumbs. Slowly add the water until a ball of pastry miraculously appears - you may not need all the water. Wrap the pastry in clingfilm and leave it to chill in the fridge for an hour.

2. To prepare the Cornish pasty filling: Preheat the oven to 180°C (gas mark 4). Roll out the pastry to the thickness you like, but be careful not to tear it. Using a dinner plate as a template, cut out 6 discs of pastry.

3. Season the vegetables separately with salt and black pepper. Put the beef into a bowl and mix with the flour and some salt and pepper. Place some potatoes, swede, onions and beef on one half of the circle, leaving a gap round the edge. Dot with butter. Brush around the perimeter of the pastry circle with the beaten egg, then fold the pastry over the vegetables and meat and seal firmly. Starting at one side, crimp the edges over to form a sealed D-shaped pasty. Brush the whole pasty with beaten egg, then make a steam hole in the centre with a sharp knife.

4. Repeat to make the other pasties. Put the pasties in the oven and cook for 50 mins until they are crispy and golden and the filling is cooked through. Leave them to rest for 5-10 mins before eating.