Coming along, at last, the construction crew worked on Saturday, most of the day, and put up two new railings one above the other and now one has a frontage on it!!! Don't know if that's the final thing or not. In the end, they worked til 6 - on a Saturday would you believe and ended up putting a front on two railings.  However, I don't understand - they have something like 11 railings up already, why on earth didn't they put fronts on them instead of doing two new ones totally. 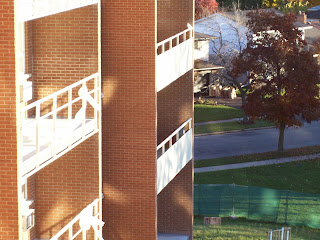 This is the machine they are using. A hoist. It has to be driven from the platform/basket or whatever you call it, at the end. Pretty difficult I think. I was watching them yesterday. I suspect I couldn't do it, I once tried backing up a vehicle with a boat on a trailer and made a muff of that. 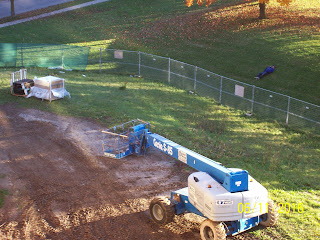 Do you see how pretty our lawns are? It's even worse out front. I am told the place will be landscaped afterwards. Trouble is there are little bits of concrete all over at the bottom of the building. Unless they re-sod the whole thing of course.

I cannot believe I forgot that Saturday was Guy Fawkes Day in the UK - I always refer to it in my blog to a greater or lesser degree. Well I have to quote the poem:


Remember, remember
The 5th of November
Gunpowder, treason and plot.
I see no reason
Why gunpowder treason
Should ever be forgot. 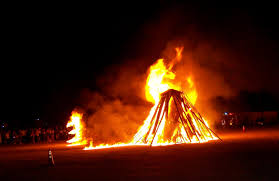 I don't know how much it is celebrated these days. Fireworks are too expensive to start with and there are all kinds of safety rules in place. At the yacht club my family ran, we used to have a big bonfire and fireworks plus we would collect money in advance and send out for fish and chips. It used to be great fun. We also would bake potatoes in the fire which would end up black on one side and raw on the other. But we ate them anyway. We didn't know about marshmallows, but it was really too big a fire even if we had known. We also burned an effigy of Guy Fawkes on top of the fire and I have just discovered, is also done in Newfoundland. I didn't know that before, thought only the Brits did it.

This is a traditional French dish. It takes a bit of preparation, but is really worth it in the end. 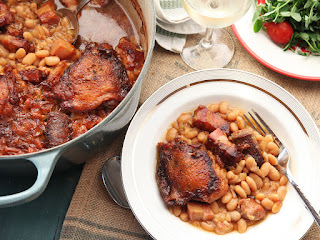 1. In a large bowl, cover beans with 3 quarts water and add 3 tablespoons salt. Stir to combine and let sit at room temperature overnight. Drain and rinse beans and set aside.

2. Adjust oven rack to lower middle position and preheat oven to 300°F. Place stock in a large liquid measuring cup and sprinkle gelatin over the top. Set aside. Heat duck fat (if using) in a large Dutch oven over high heat until shimmering. Add salt pork and cook, stirring occasionally, until browned all over, about 8 minutes. Transfer to a large bowl and set aside. (If not using duck fat, cook pork with no additional fat.)

3. Season chicken pieces with pepper (do not add salt) and place skin side-down in now-empty pan. Cook without moving until well browned, 6 to 8 minutes. Flip chicken pieces and continue cooking until lightly browned on second side, about 3 minutes longer. Transfer to bowl with salt pork.

4. Add sausages and cook, turning occasionally, until well-browned on both sides. Transfer to bowl with salt pork and chicken. Drain all but 2 tablespoons fat from pot.

5. Add onions to pot and cook, stirring and scraping up browned bits from the bottom of the pot. Cook until onions are translucent but not browned, about 4 minutes. Add drained beans, carrot, celery, garlic, parsley, bay leaves, cloves, and stock/gelatin mixture. Bring to a simmer over high heat. Reduce to low, cover Dutch oven and cook until beans are almost tender but retain a slight bite, about 45 minutes.

6. Using tongs, remove carrots, celery, parsley, bay leaves, and cloves and discard. Add meats to pot and stir to incorporate, making sure that the chicken pieces end up on top of the beans with the skin facing upwards. Beans should be almost completely submerged. Transfer to oven and cook, uncovered, until a thin crust forms on top, about 2 hours, adding more water by pouring it carefully down the side of the pot as necessary to keep beans mostly covered.

Author Notes
The first time I had cassoulet in its home turf it was a revelation. This loose, almost soup-like stew of beans and meat was so far removed from all versions of cassoulet I'd had in the United States, or even in other parts of France. It was a large, bubbling vat of beans and meat, covered in a crust so dark that it was almost black. Rich, meaty, and overwhelmingly simple, the main flavor was just that of the cured meat, a good stock, and beans.

Why this recipe works:

Soaking the beans in salted water overnight helps keep them tender as they cook.

Chicken used in place of the traditional duck picks up tons of flavor from the other cured meat products and comes out meltingly tender and meaty.

Adding gelatin to the cooking liquid helps it form a better crust on the casserole as it bakes.