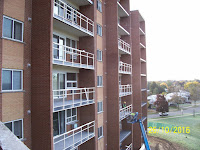 So there was I,in a tizzy this morning, because I saw they were bringing their hoists right under our windows. I thought nobody had told us and we needed to clear out balcony. In the end, I called down to the guys below and they assured me they would only be working up to the 4th balcony. I had seen something about this on a notice but hadn't really taken it in that they would be coming round to us too. Seems a bit daft to me, they are cutting out the walls on balconies up to and including the 4th and then they have the balcony walls laid on the ground and someone is breaking them up by drilling them!! Not only that, having started to put up balcony walls across from us, they have stopped and left the job half finished. Doesn't seem like any rhyme or reason to me. We now have several tiers around the building where the balcony walls up to the 4th have been removed. This is where they were with the railings when I posted the pic a few days ago and this is where they still are. Of course what they were doing below us was bloody noisy.

So we went shopping. Spent a small fortune, but there were several items at 2 for $ but if you bought just one it was more expensive and although Matt didn't want me to pick them up, only the ones on my shopping list you understand, I did anyway. Why wouldn't I? In the long run it saves money.

Thank goodness the American election finally takes place next week. It will, at least, get resolved one way or another. Of course if HE loses he will say it was rigged.

The name of this blog includes the word Chocolate but I haven't posted anything chocolatey for a while. Here is something which really fills the bill.

This chocolate mousse cake is a patisserie-style glazed mousse torte. It does take some time to make, assemble and set, so start preparing it at least a day ahead of when you intend to serve it. 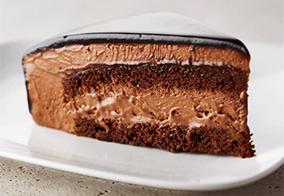 1. For the cake, preheat the oven to 325 F. Grease 2 8-inch round cake pans, line the bottoms with parchment paper and then lightly dust the sides of the pan with flour, tapping out any excess. *Please note that only 1 cake layer is needed for this recipe, but it is easiest to make this recipe in its full measure and freeze the second cake for a later use.

2. Whisk the boiling water, chocolate and butter together until melted (it will be visibly grainy) and set aside.

3. Whip the egg, sugar and vanilla until the mixture doubles in volume (about 2 minutes on high speed) and then fold in the chocolate mixture by hand.

4. Sift the flour, baking powder, baking soda and salt over the batter and fold in, then stir in the hot coffee (this will make the batter become fluid). Divide the batter evenly between the 2 pans.

5. Bake the cakes for about 25 minutes, until a tester inserted in the centre of the cake comes out clean. Allow the cakes to cool completely in the pans.

6. For the mousse, have ready a 9-inch springform pan, lining the bottom with parchment paper (in order to make the mousse-filled cake easier to remove from the pan). Whip 1 ½ cups of the whipping cream until it holds a medium peak when the beaters are lifted and chill.

7. Heat the remaining 1 ½ cups of cream to just below a simmer and then pour it over the chopped chocolate. Let this sit one minute, then gently stir until incorporated. Set aside.

8. Place the egg yolks in a bowl and whip for a minute on high speed. Place the sugar and water in a small saucepot over high heat and boil (occasionally brushing the sides of the pot with water) until it reaches 250 F on a candy thermometer. Start whipping the egg yolks on medium speed and then carefully pour the hot sugar down the side of the bowl to avoid splashing, and then increase the mixer speed until high and whip until this has doubled in volume and cooled to about 105 F (just above body temperature).

9. Measure the temperature of the ganache to ensure it is close to 105 F as well, and fold the ganache into the whipped yolks. Let this cool for 15 minutes, or until just above room temperature, then fold in the chilled whipped cream in 2 additions.

11. While the cake is setting, prepare the glaze. Bring the water, sugar, and cream to a boil in a medium saucepot. Once boiling, whisk in the cocoa powder and simmer (reducing the heat if needed) for 4 minutes, stirring often, (the consistency will not change). Remove from heat. Soften the gelatin in ¼ cup of cold water and then whisk this into the hot cocoa mixture until dissolved. Cool the glaze to room temperature, then chill completely, at least 3 hours.

12. To finish the cake, remove it from the freezer invert the pan onto a cooling rack placed over a parchment-lined baking tray. Use a hair dryer on a low, hot setting to gently warm the pan so that it releases from the pan, the sides first and then the top. Warm the chilled glaze while whisking occasionally until just melted and smooth and pour this over the torte, spreading gently with a spatula to ensure that it covers the top and sides of the torte evenly. Chill the cake for at least 30 minutes, then lift it onto your presentation plate and store chilled until ready to serve.