Matt did a PSA test a week ago and today went to see the specialist. Apparently his readings are slightly up so he has to do it all again in 3 months. Bit of a concern.

Rather than sit around dozing all afternoon, I suggested we went bowling, so we did. Walking to the car Matt's hip gave way and he was in agony for a while. Had to lend him my cane. He wanted to go on to the alley though so we did. He started throwing strikes all over the place and decided he should always play crippled, I assured him if he kept bowling like this, I would ensure he was really crippled LOL. His first game was really good, but the other two weren't. None of mine were much good. Oh well. Bowling again tomorrow of course (Thursday). His hip is fine now by the way.

On the way home, went to the Post Office to collect a parcel. Got home and there was another delivery card for another parcel. Ordered Matt a new shaver and me a CD of Pentatonix (I posted their version of Allelujah about a week ago). The Album is called That's Christmas to Me. Looking forward to getting it.

I posted a recipe for a Sausage Casserole earlier this week. I made that this evening for supper. The only thing I didn't use was the potatoes, I didn't think they were necessary with the beans. It was delicious and we both enjoyed it. I can highly recommend it. I only used 4 sausages so basically ended up with enough for two meals for us.

People frequently say they don't like Brussels Sprouts. I came across this recipe today which I thought may help as this vegetable is so very good for you. Of course the way you cook them in the first place makes a difference. As I said a few days ago, I now use distilled water to cook mine. I don't have a steamer anyway. 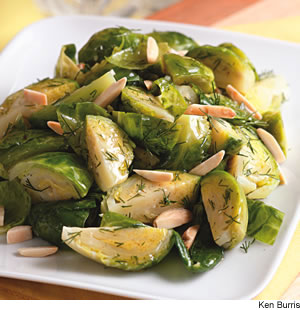 When you brown butter, as in this recipe, the flavor intensifies so adding just a little to Brussels sprouts still makes a big impact.

1. Bring 1 inch of water to a boil in a large saucepan fitted with a steamer basket. Add Brussels sprouts, cover and steam until tender, 5 to 7 minutes.

2. Meanwhile, melt butter in a small skillet over medium heat. Cook, swirling often, until the butter turns a nutty brown, 1 to 3 minutes. Stir in oil and scrape into a large bowl with a rubber spatula. Add the Brussels sprouts, almonds, vinegar, dill, salt and pepper and toss to combine.

Tips
To toast slivered almonds, place in a small dry skillet and cook over medium-low heat, stirring constantly, until fragrant and lightly browned, 2 to 4 minutes.