Have you been watching? We missed the opening ceremonies unfortunately. Have seen some of the skating, was delighted that the Canadian team won the silver in the team skating event. Also, thrilled to bits about the two sisters who won Gold and Silver for the mogul event. The pair of them were so excited, it was great to see. Justine Dufour-Lapointe and her sister Chloe carried them off. I don’t think I would like that sport, I cannot believe, in the long run, that it would do your brain much good with all that shaking and bumping. We also got a bronze in snowboarding so we are feeling pretty proud of our athletes at the moment. I was sorry not to see the skating finals. The flowers don’t seem to be a lot more than greenery, haven’t seen a proper picture of them yet.

Funny story which really got a reaction on Twitter apparently, a US

bobsledder, Johnny Quinn, got trapped in a bathroom and not having a phone, had to break down the door in order to get out. He said he reported it and thought he might be in trouble but the Russian officials were very nice about it.

Bowling again today. Hope I do better than I did last Thursday. Matt

didn’t do much better either. Next week, February 17, is Family Day here so our league bowling has been cancelled. However, the alley have agreed that if we want to we can bowl there on the Tuesday, downstairs. Never even been downstairs, let alone bowled there. Guess it’s much the same but I believe it is set up for Cosmic Bowling for people wishing to hold birthday parties and such.

This is what we had for supper on Saturday night. It was delicious but poor Matt found it too spicy hot for him. I loved it. I guess if we make it again, we will have to tone down the chilli sauce. Not the best picture, guess who took it? We had already taken half of it out when I suddenly thought “picture”!


Hot and Sour Pork with Cabbage 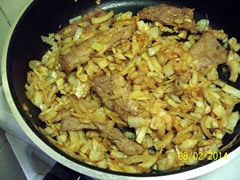