Saturday we drove to Burlington, ON, to have lunch with friends. Burlington is on Lake Ontario. A 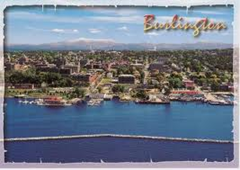 delightful lunch it was too, nice to see them, haven’t done so in such a long time, mostly because they are still young enough to work all the hours God sends so just don’t have a terrific amount of spare time. It was an absolutely beautiful day with bl

ue skies. Still a little chilly, but made you think of spring at least. Of course we do have a lot of snow on the ground in places.  Later, I had intended to shut off the lights for Earth Hour, but I completely forgot until someone mentioned it on Facebook. First time I haven’t done so since the idea began.

Funny thing about The Great Lakes we live in an area surrounded by them (Huron, Erie and Ontario) and yet th

ey rarely impinge on our consciousness. When you do see them, to me its a bit like going to the seaside, there is a frisson of excitement and I try to see as much as possible al;though I am usually in a car. The lakes are absolutely vast, and appear to go on forever. They are really inland seas, not lakes at all. The US and Canada share them all except for Michigan which is entirely in the US. Lake Ontario is the smallest and is 7,320 square miles, 193 miles long and 53 miles at its widest point.

One more week and the A to Z Blogfest begins. I have finished my blogs for the month. As I said before, I have volunteered to help L

. Diane Wolfe, as a Spunky Soldier, to keep an eye on her assigned blogs, as yet I don’t know which ones will be my responsibility. Checking today there are over 1200 blogs signed up. If you haven’t joined in, I recommend you do so, its not only great fun, but helps to spread your name around the blogging world so more people read your blogs.

On Sundays I like to have a glass of champagne before lunch. I recently

found some Parmesan Cheese crisps which I am now adding to my drink. When I was a kid, my mother used to make fried cheddar cheese for me and I loved it. These Parmesan chips are oven baked, but much the same thing and absolutely delicious. Unfortunately they are also quite expensive, $7.99 for 3 oz. which is not very much. It turns out they are made in New York by Kitchen Table Bakers so next time we are in the States I will see if I can get them and bring a few packets home. I do like them so very much. They go very well with champagne too.

In honour of the beginning of Passover this evening, and for those who make seder tonight, here is a Matzoh Ball Soup recipe.

Contributed by Andrew Zimmern
Photo © Stephanie Meyer
For 40 years I looked high and low for the best matzoh ball recipe, but nothing measured up to my grandmother’s until I discovered Susan’s, an old family friend. After a Passover seder at her house 20 years ago, I begged for this recipe and finally she gave it to me. It’s the perfect balance for a matzoh ball: light enough to float, dense enough to be a good “sinker.” I can now die in peace knowing I have achieved what every Jewish man should for his family: a roof over their heads and a nice chicken-soup-and-matzoh-ball recipe. We eat this meal year-round, and we call it chicken-in-the-pot. When I make it as a main course, I serve the chicken in sixths with the skin and bone. I will often add kasha (toasted buckwheat groats) or noodles and leave the vegetables in bigger pieces so the dish is more like a poulet pot au feu than a first course for Passover seder. For the uninformed, the seder is a ritual feast that marks the beginning of the Jewish holiday of Passover. It is held at sundown on the 14th day of Nissan in the Hebrew calendar and on the 15th by observant Jews living outside Israel. That means late March or April for most of us. The meal involves a retelling of the liberation of the Israelites from their bondage in ancient Egypt. It’s basically Thanksgiving for Jews, and it’s my favorite holiday of the 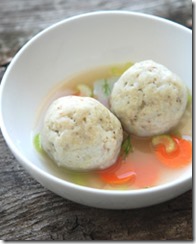 Make Ahead The soup can be prepared through Step 3 and refrigerated overnight. Cover the matzoh balls and shredded chicken with plastic wrap before refrigerating.

Happy Seder to those celebrating.

Have a good day