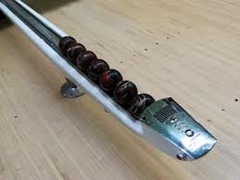 I have to accept that, I will have the occasional flash in the pan, but generally its going to be average which is why, I suppose, that we have averages. I was trying to explain bowling to my computer guy the other night, I don’t think he had a clue what I was talking about. He is originally from the Ukraine, maybe they don’t bowl over there. This picture shows a rack of house bowling balls, a lot of us own our own balls which get added to the rack. Sometimes there are so many privately owned ones, there isn’t much room for the house balls.

I have been sharing this video with all kind of people and thought I should share it on my blog too. Its a video of the inside of the International Space Station. Really quite incredible. I guess I imagined it to look something like Star Trek or similar inside, I was quite wrong.


Cooking.com sent this recipe today, I love crêpes, I love mascarpone and I love chocolate, so what’s not to like about this one?

Chocolate Crêpes with Mascarpone and Toffee

Creamy mascarpone and sticky-sweet toffee bring this decadent chocolate crepe to another level. DIRECTIONS
MAKE CRÊPE BATTER: Place the eggs in a large bowl and beat well. Beat in the sugar, milk, flour, cocoa powder, salt and 2 tablespoons of the melted butter. Cover and let stand for 30 minutes.

MAKE TOFFEE: Combine the sugar and water in a saucepan. Stir over low heat until the sugar dissolves. Bring to a boil and boil until golden, 5-7 minutes. Lightly oil a baking sheet. Pour the toffee onto the sheet and tilt so that the toffee forms a thin layer. Let cool and harden for 10 minutes.

Remove the toffee pieces from the baking sheet, place in a bowl and crush the toffee with a spoon. Stir three-fourths of the crushed toffee into the mascarpone. Set aside the remainder for decoration.

CHOCOLATE SAUCE: Melt the chocolate and butter over simmering water in a double boiler. Stir in the cream until completely blended. Flavour with the brandy, if desired.

MAKE CRÊPES: Heat a crêpe pan or 8-inch nonstick frying pan over moderate heat. Brush the bottom of the pan with some of the remaining 1 tablespoon of melted butter. Pour in 2 tablespoons of the crêpe batter and tilt the pan to spread the batter evenly and thinly. Cook for 2-3 minutes until the crêpe is just set on top and brown underneath. Turn to the other side and cook for 1 minute. Remove to a plate and repeat until all of the mixture is used, making at least 6 crêpes.

Stack the cooked crêpes on a plate with a piece of parchment or waxed (greaseproof) paper between each crêpe. Keep the whole plate covered with a clean dish towel.

When all of the crêpes are cooked, place 1 tablespoon of mascarpone and toffee mixture in the center of each crêpe. Fold the sides over so that it looks like a pillow.

Serve each crêpe drizzled with chocolate sauce and extra toffee.