It being Good Friday I take this opportunity of wishing everyone a Happy Easter. We will be cooking a turkey breast on Saturday as well as chomping on Lindt Bunnies on Sunday. 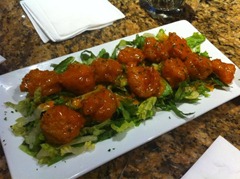 As I mentioned on Thursday, we went on our Travel League bowling outing and before went for lunch at the Red Lobster. Normally I am not that keen on that restaurant, but a friend recommended Sweet Chilli Shrimp, it was delicious. Best thing I have ever eaten there. It was fairly spicy and my tongue was tingling pretty well eating it. Matt had the same dish and thoroughly enjoyed it as well. I do like their cheese biscuits too and was very careful to allow myself only one. Just as well as I later found out they were 160 calories a piece. As for the bowling itself, the less said about that, the better. We have one more travel league this season and that’s it til September. We are starting in a different alley next season as no-one is yet quite sure where Waterloo Bowling Lanes (our personal home alley) will be with their new place. They talked about opening it about mid September.

introduction of smart phones. Being a local company, it is obviously good for the area if we have such a successful company in our midst. Their shares really went down for a while but with a $94 M profit I think things will improve immensely. I wish I were still in the job market with all the computer companies in the area, I would love to be involved. In some ways I envy the younger people of today with the technology opportunities they have.

Carrot Cake is, of course, one of my favourite desserts, so I couldn’t resist posting this. I will NOT be making it myself, I am trying to lose, not gain. In fact M & M’s Meat Shops do a very good frozen carrot cake which I keep in the freezer and allow myself a small piece of once a week. But I would like to try this one. Several years ago I asked someone at work who made a lot of cakes to make one and bring me a small piece, she brought me the whole cake. I tried it and left the rest for my colleagues, hard to do, but…..

Contributed byJodi Elliot
Carrot cake, that 1970s favorite, has a new audience at luxe restaurants like Manhattan's Le Bernardin. At the Urban Farmer in Portland, Oregon, pastry chef Jodi Elliot prepares the ultimate version: moist and not too sweet. 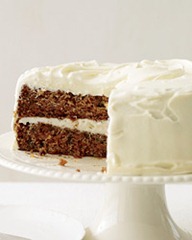