Story in the news today, a cat escaped from its carrier in the

passenger compartment of an Air Canada plane which ended up delaying the plane’s departure for 4 hours. The cat was accidentally released by a passenger and ended up inside the wiring of the cockpit so they eventually had to enter the area from outside the plane. They retrieved the cat, Ripples, but felt they had to ensure that all the wiring was intact and had not been damaged in any way. Poor cat must have been terrified, the owner was pretty upset too.

More on planes, I just heard a snippet on the radio about an air hostess, Vesna Vulovic, was working on a DC-9 plane flying over

Czechoslovakia which exploded due to a powerful explosive placed on board by a terrorist group and she fell 33,300 ft. without a parachute; she survived. There is nothing to say what she landed on, but presumably something cushioned her at the time. She had broken ribs and legs, but within a few months was back on her feet again. This happened in 1972, I sure don’t remember the event, we would have still been in England at the time, but how incredible.

from Amazon.com for the Kindle. Some are designed to draw you into a trilogy so you will buy the rest, but many of the books I have downloaded have been stand-alones. Last night I downloaded 5 books which will cost me said 99¢ altogether and that is not the first lot I have downloaded either. I’m getting an email called Pixel of Ink which tells you what is available each day. I will have to stop soon as I have so many to be read, I will never catch up. Not to mention that friends have given me another large bag of books to read. Of course I haven’t a lot else to do at the moment as I am not bowling, in fact yesterday I missed our Travel League, maybe by next month I will be able to go with them and bowl.

We decided to have pork chops for supper last night, I ended up 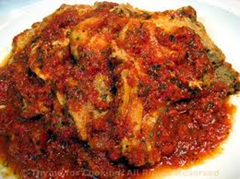 sautéeing onions and garlic, adding a small can of tomatoes, a load of oregano, salt and pepper, then having browned the chops, putting them into the sauce to cook through. I had done some collards too so I ended up putting them in the pan as well, it was good. I based it on an Italian pork chop recipe I found, but left a few things out.

I thought this recipe sounded good and somewhat easy to do. Have a dinner party coming up, maybe I will try it. I also came across another recipe in a blog, Dragon’s Kitchen, for an egg starter. I really want to try it, looks delicious. 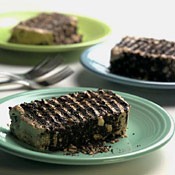 Coffee and hazelnuts give this cake a variation on Nabisco's Famous Wafer Roll recipe a more sophisticated flavor. To be safe, buy two boxes of cookies, as some may break. This cake slices best after 2 days in the refrigerator.
INGREDIENTS

Lightly grease a 6-cup loaf pan. Line the pan with two pieces of overlapping plastic wrap, allowing the excess to hang over the edges of the pan.

FOR THE CREAM: In a bowl, combine the cream, espresso powder, and sugar. Whisk until the cream holds firm peaks. Spoon about two-thirds of the whipped cream into the prepared pan. Tap the pan firmly on the counter to even the cream and eliminate any air bubbles.

FOR THE COOKIES: Starting at a short side of the pan, arrange 11 cookies in the cream, standing them on their edge in a row like dominoes. Gently squeeze the cookies together as you go. Do the same with a second row of cookies, slightly overlapping the cookies from the second row with the cookies in the first row. Continue with two more rows for a total of four rows. Press down on the cookies gently. Cover them with the remaining cream. Smooth the cream with a spatula, gently pressing to make sure any gaps between the cookies are filled. Tap the pan on the counter several times to eliminate any air pockets.