I was very pleased, over the weekend, to see that the Shafia family have been convicted of 1st degree murder. In case you don’t know, they father, his wife and a son, killed his first wife and three daughters by pushing their car into a lock on the Rideau Canal – all in the name of honour killings. What horrifies me is they are only getting 25 years. Our justice system is nuts. They take 4 lives and are only getting 25 years for doing so. Don’t you agree this isn’t tough enough?

Aren’t teachers supposed to intelligent? If so, why would they be

stupid enough to have sexual relations with their students? We keep hearing such stories and there is another in the headlines right now. Joanne Léger-Legault has lost her teaching license for having relationships with four boys over 5 years. How daft can you get? She is an award winning high school teacher and now her teaching career is kaput. What a stupid woman. Hell you can walk into just about any bar and pick up a sexual partner, why get involved with your students? I personally cannot understand the mentality behind this story. What do you think about it?

The other day there was a report that the government were going to look into revamping the pension and retirement system. I have

no doubt that pensioners right across the country got somewhat nervous, I sure did. However, yesterday Mr. Harper announced that there would be no cuts in retirement income, phew!!! Considering some countries have cut into pension incomes, it was always on the books although economically Canada is doing a lot better than many countries at the present time. However, lets face it, one would never get rich on a government pension. Unlike the politicians themselves who get very nice retirement packages thank you.

Well, we’re finally on the last day of January, I have never known January to drag so long, it was driving me up the wall. Maybe being unwell wasn’t helping of course. Plus I haven’t been bowling or doing much of anything, so that didn’t do much for me. I am toying with the idea of trying to bowl on Friday, not sure about it though. Still got quite a bit of pain; for instance, coughing kills me, yes in my shoulder, I guess you contract a lot of muscles when you cough. However, we are talking my left shoulder and of course I bowl with my right arm so I might just try a few balls and see what happens.

This is a shrimp dish we have made several times and always enjoyed it. Unfortunately I have never taken a picture of the dish so don’t have one to share. You can bet, one thing I never do is leave on the tails. I hate having to deal with them at the dinner table.

This is a simple Japanese preparation that can be prettily arranged on a serving plate. Sweet sake is widely available, but the same quantity of sweet sherry may be substituted if sake is 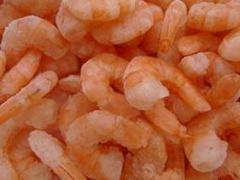 not to be found

1. Cook shrimp til just turned pink. Drain. Arrange in a single layer in glass or plastic container, 12 x 7½ x 2 inches. Heat soy sauce to boiling; add gingerroot. Reduce heat; simmer uncovered until most of the liquid is absorbed, about 5 mins. Stir in vinegar, sugar, sake and salt; pour over shrimp. Cover and refrigerate at least 2 hours.

NOTE: We leave the shrimp in the marinade as we find the pieces of ginger delicious as do most of our guests.