Having posted about financial programmes such as Quicken yesterday, I was lying in bed thinking about bookkeeping and remembering that when I was 17 I actually had some classes in bookkeeping although I don’t remember much about them. Don’t 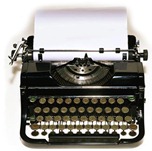 think I would ever have been any good at it. These classes actually took place at the secretarial college I went to. The college was run by a Miss Edyvean who, to us, was absolutely ancient, I really don’t know how old she was, probably late 40s or 50s, but we youngsters certainly thought she was a lot older. She was actually very good at teaching shorthand and typing, I learned Pitman’s shorthand and typing on a manual machine where all the keys were covered up so we had to learn to touch type. I left there with 120 wpm in shorthand and 70 typing which considering how often I would take the afternoon off and go to the movies, there was a

theatre quite close, is pretty good. In those days, you learned to be an efficient secretary no matter what the industry, there was no specialising, you were expected to learn that on the job whether it be in the medical field or the oil refinery field. In fact I went for a job at the local oil refinery and fluffed it. I couldn’t manage the speeds even though I had a certificate saying I was qualified to do so. The picture, by the way, says Long Live Pitman’s Shorthand.

Someone told me, in those far off days, that shorthand wouldn’t be needed in the future and that secretaries would be virtually obsolete. I didn’t believe them, but in fact they were right. People need assistants but not secretaries any more. I don’t think shorthand is taught to anyone today, pity in a way, it’s a good way of taking notes although I guess even that is done electronically these days; there were two systems, Pitman’s and Gregg, in fact Miss Edyvean could teach both, clever woman. I still use shorthand occasionally, but I doubt any other person could read it as I am not as accurate with it as I once was. I can figure out what I have written, but I defy anyone else to do so.

I used to take the bus from home into Rochester (think Dickens) to start classes at 10 a.m. They ended around 4 p.m. as I recall. I

usually went to a restaurant, the Castle Tearooms, for coffee and fresh scones before class, they were delicious scones, warm out of the oven. Yum. I think we took lunch with us. In fact I that’s when I first started smoking – we used to have a cigarette in the lunch room.  At that time I smoked at least 8 cigarettes a week LOL. In those days we had no idea how dangerous smoking could be, we just felt very grown up puffing away. I’m not even sure if I inhaled at that time. Pity I ever learned to do so. Took me a very long time to have the sense to finally quit, which I did about 16 years ago now. Now we know how dangerous it is, I cannot fathom why people start smoking.

I picked up a tip the other day from a list of such things, to label

one’s computer cords with the tags of bread and such. I thought it was an excellent idea. Especially with all the different cords I tend to carry when we travel. Camera, Kindle, Palm, etc. etc. In fact there were lots of excellent tips another one being to use egg cartons to sort and separate Christmas decorations, unfortunately that came after we had packed up everything.

Having talked of scones, I have to give you the scone recipe which is pretty simple and I have always used. Of course people add many things to scones, cheese, fruits, jams, etc. but I personally like mine perfectly plain with butter. Well Devonshire cream and jam if you insist. You can make these scones richer by adding an egg and an extra ounce of butter. Now I’ve got to go and make some, this is making me hungry. I often used to make them late at night when we had had friends over for the evening. They are that simple.

For these scones, unsalted butter gives a very creamy taste. Sift flour, baking powder and salt. Rub in butter. Add sugar. Mix to a soft dough with the milk. Turn on to a lightly floured board and knead quickly. Roll to 1/2 to 3/4 inch thickness. Cut with knife or floured cutter. Place on hot baking tray and brush with milk. Bake in hot oven 450°F for 12-15 minutes. Delicious with jam, fruit or cheese.