dock one morning recently. It turned out to be a ribbon seal which is a critter rarely seen, particularly on land. It was apparently just lying there “chilling out” but the wildlife people are thrilled and trying to get sightings of it. I have never heard of it before, of course I repeatedly find out there are many animals I have never heard of. There is an ad running on TV for one of our many lotteries showing a couple in a tropical paradise with lots of animals and birds around, there were two little grey animals which we couldn’t identify so I sent a link to Glenda Larke (Tropic Temper) to id for me and she thinks they look like Sugar Gliders, babies at that. Her comment about the ad in general was that it was whacky as there were all kinds of different critters which wouldn’t really be seen together.

Sunday morning we planned and ate a “fry up”, not quite in the 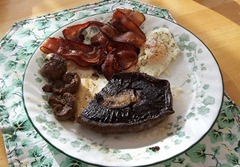 traditional English style, but we had bacon, eggs, lamb’s kidneys (yes really, delicious) and Portabella mushrooms. We actually had it for lunch rather than brunch as I have to stick to three meals a day. I forgot to take a pic until we had started eating. Don’t figure we could handle it these days, but once upon a time I would have added sausages and fried bread or crumpets which I love, Matt prefers the bread, probably fried tomatoes too. NO I would not have added Heinz baked beans, I don’t know where that started, but on my “fry up” plate, I do not want to know. As a kid the only time I had baked beans might have been on toast for supper. As a kid I ate them, guess I didn’t know any better. I ate canned spaghetti too, I was very surprised after the war when I found out what spaghetti was really like.

Sunday afternoon I had to go for an ultra sound at 4:30. Odd time 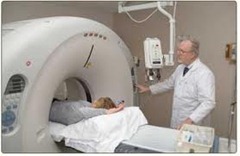 one may think, but in fact a friend of ours had to go for an MRI once at 3 a.m. On Tuesday I have a CT scan schedule in the morning. I am hoping they don’t require me to stretch my arms above my head as in this picture, I physically cannot do it. However, I hope that as its my shoulder we are concerned with, it won’t be necessary.

As the hospital was in Cambridge, we popped in to drop off some books at a friend’s house, they had lent me a large bag full, and I ended up with another bag full. We had supper too which was nice of them. They are coming over for Matt’s birthday dinner.

Interesting, they recently showed a new silent film in Alberta made from lost footage which was originally filmed in 1919 for the

Hudson’s Bay Company. The original film has been lost but they discovered some raw footage which has been made into a modern film and shown in Edmonton the original was called The Romance of the Far Fur Country and was designed for the company’s 250th year celebration. The film documented the company’s history as well as showing the activities of fur trappers in that time period. Would be fascinating to watch I would think.

Talking of silent movies, I hear people in Britain have been walking out of The Artist and asking for their money back as they couldn’t hear the dialogue. In case you are not aware, it is a silent movie in black and white. I gather the movie has been very popular over here. One movie I really want to see is The Iron Lady about Maggie Thatcher with Maggie played by Meryl Streep. Think I mentioned that the other day, but I do like Meryl Streep and I admired Maggie Thatcher very much. Although getting an American to play a British Prime Minister seems a little odd.

Here’s a pretty easy way of making something which is very similar to chicken cordon bleu.

Making a pocket in the chicken breast to hold the stuffing is easy with a good, sharp, thin-bladed knife. Browning the chicken in a skillet before baking gives it a beautiful golden color, and finishing in the oven ensu 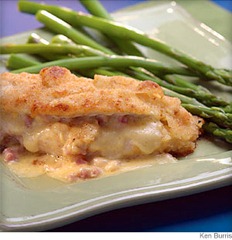 res that it cooks evenly throughout.