Yesterday we heard the news from family in England that Granddaughter, Beth,

got 10 A*s and one A in her GCSE’s. What is particularly phenomenal about this is that she has taken them a year early. We are both thrilled to bits with these marks although with her it seems to be par for the course. I just felt I had to do some bragging about it in my blog. She is actually planning to go into the theatrical world which seems a little bit of a waste to me.
I finally finished A Dance with Dragons by George R.R. Martin

yesterday, I did enjoy it but I didn’t like the continual switching of characters every time a new chapter started. Another thing I am not keen on, every time he introduces sympathetic characters, he ends up bumping them off. Someone pointed out that he has too many main characters, I guess this is the problem although when he kills them off, that deletes that segment. A chapter or two we won’t have to worry about in future books, however many he ends up writing in this series. His books are available on Kindle by the way.

I am now reading another book which was recommended to me by someone on line and I am damned if I can remember who that was. It is The Golden Key a collaboration by three authors, Melanie Rawn, Jennifer Roberson and Kate Elliott, not sure if I have read any of their work before. Its actually an old book (1996) although the copy I have looks absolutely new and is not a paperback. I haven’t yet got very far, but what I have read is good.

Irene is causing lots of worries along the east coast of both the States and Canada. During a golf game in New Jersey which Matt was watching, they were talking about plans for Saturday or Sunday when the hurricane would arrive. All our friends in NC are battening down the hatches, and the outer islands are being evacuated. It is being described as a monster storm, particularly as it is over 500 miles wide. If you are out that far, high winds and rain will be about it, for you, but closer to the eye it could be very nasty in some areas. It is being touted as a category 4 in the near future. On GMA yesterday they were advising people not to try and take hurricane pix in cities and towns because of the dangers from flying debris. Even taking pix on beaches you could get caught in storm surge. Matt nearly was once. The swirling water came up the beach and surrounded him, luckily there were steps he could hang on to til the water retreated and that wasn’t even a hurricane just a major wind storm. We are hoping the rental cottage will be OK of course.

This morning there was a report of a rogue wave in Florida which swept 8 people from a dock/pier area. This wave was tied in with Irene. As they pointed out on GMA, today the hurricane is off land so there won’t be a lot of pictures about it, but tomorrow it is expected to hit land at Cape Hatteras, North Carolina and the tides are morning and evening this weekend, just when the storm is expected to hit causing a surge. New York city is also evacuating low areas in the expectation of a storm surge too.
This looks like a good lunch.

From Eating Well: July/August 2011
Fresh corn kernels, tomatoes and lettuce fill these hearty turkey wraps. This wrap is great for picnics or when you need to have 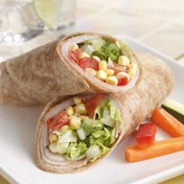 dinner on the run. Add some crumbled feta or shredded Cheddar for another layer of flavour. Serve with carrot sticks, sliced bell pepper or other crunchy vegetables plus your favourite creamy dressing.
4 servings  Ingredients