Over the weekend the Americans have been bandying round the sum of 2.4 trillion dollars, I knew I had seen pictures so I Googled to see what that amount of money looks like. Its so easy to bandy these sums about without realising what is really involved. I have been having trouble understanding the whole situation in the States, I can’t understand why getting further into debt would enable them to pay off their loans!!! Doesn’t sound logical to me. Nor do I understand when they are so far in debt they are worrying about their triple A credit rating. How can you have such a credit rating when you are so in debt????

In Saturday’s blog I was talking about flat beans, a friend in the UK pointed out that flat were quite different from runner beans, I must admit I generally tend to lump them all together because we so rarely have access to any of them here. When we lived in North Carolina, there was one produce stall we went to all the time and in season they would have all kinds of different beans, some of which were runner beans, I don’t remember all the different names they went by but they were all good. I also remember many years ago in the UK that a friend, knowing how much I liked runner beans, grew some black ones specially for me. I had never seen or heard of them before, I prepared them in the usual way, French cut, and then was very disappointed that when I cooked them they turned green. What a chiz. Damned if I can find a picture though, not even on Google UK. I don’t mean the bean inside was black, but the pod itself was black.

Today is Civic Holiday in Canada, means my anticipated deliveries from Amazon.com will not be arriving til, hopefully, tomorrow. I thought it was a holiday in the States too, but seems I am wrong. They have been shooting off fireworks over the weekend, why, I don’t know, it isn’t usual for Civic Holiday. Of course, holidays don’t mean much when you aren’t working anyway.

This sounds a delicious twist on chicken soup and even though its summer, I still like a good soup. I will definitely have this one in the pot in the not too distant future. Not only that, its gluten free. 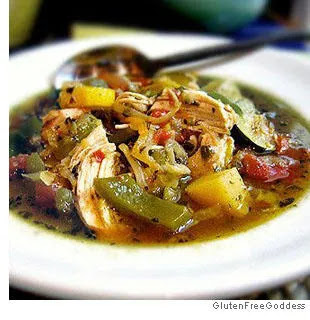 This isn't your Grandma’s chicken soup. And she might not approve of the liberties I've taken crankin' up the standard Jewish flavours more than a simple notch. But tradition is one thing. Great taste is another. I say, be flexible.

Drizzle some extra virgin olive oil into the bottom of a Crock Pot or slow cooker. Lay the chicken breasts in the bottom; top with half the chopped garlic. Season the mixture with sea salt and pepper.

In a large bowl, combine the shredded cabbage, bell pepper, yellow and zucchini squashes, potatoes, and green chiles; and toss them with a drizzle of extra virgin olive oil. Season the mixture with sea salt, ground pepper, herbs, and a shake or two of hot red pepper flakes. Toss to coat.

Pour the veggies into the crock in an even layer. Pour on the diced tomatoes. Add the chicken broth and a dash of balsamic vinegar, to taste. The liquid should just about cover the veggies. If you like more of a brothy soup than a stew, add more broth.

Cover and cook on high for 5 to 6 hours, until the chicken is tender and easily breaks apart into pieces with a large spoon (my chicken was very cold when it went into the pot, so adjust your cook time accordingly, if you need to).