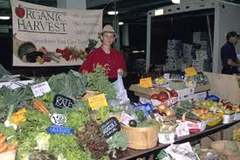 I finally got my rear end in gear on Saturday and went to Kitchener’s Farmer’s Market. One of the main reasons was to see if we could find more flat beans, we did, got $8. We also got some corn and local blueberries (Matt enjoys those.  I went to the lamb butcher, Charles’ Meats but I hadn’t called ahead so he had no lamb’s kidneys, pity, however I did get some stewing lamb to make a hotpot later. We also bought a piece of Brie for supper. The market always has a huge selection of fresh vegetables, but for some reason we forget to go there. We have some friends who live close by and go every Saturday. There were not many stalls which sold flat beans; after we had bought a load I saw one stall with small quantities of them. As I was buying them a woman, Portuguese I think, asked me if they were good, I then proceeded to tell her how to French cut them, not that I had a knife, but I tried to demonstrate. I wonder if she had a clue what I was talking about. She bought a basket anyway, so maybe she did get it. There is a much bigger Farmer’s Market at St. Jacobs which really isn’t that far, but the market is so huge and parking usually means a very long walk before you get to the market so I can’t cope with it any more. For what I want, the local one is fine.

You know, I had my vascular angioplasty on June 15 and here we are, two months later, and I still have trouble with oedema. I am not only getting fed up with it, but I am a bit concerned about driving down to North Carolina next month, sitting in the car for hours has a tendency to cause swelling anyway.

Talking of going away, it occurred to me the other day that, at our age, it wouldn’t be a bad thing to carry our living wills with us – just in case. You never know do you? A friend’s husband went out for a walk and collapsed on the sidewalk. If that happened when one was away, who’s to say the remaining partner could authorise treatment or lack of it. Not very cheerful thoughts, but necessary ones. Part of those vicissitudes a friend said I write about.

I mentioned, the other day, that I was reading A Dance With

Dragons by George R.R. Martin, his fifth book in his Song of Ice and Fire series. I have to say, I am having trouble with it. Every chapter deals with a different character so you are just beginning to get interested in one when you switch to another. I am finding it difficult to get into the story and to maintain sufficient interest in the book. I guess I will persevere but I am certainly find it difficult. Maybe its just me, others may like it much better, I don’t know.

We cooked this for supper last night. We changed a few things, we used regular pork chops, only one apple, one onion and 1/4 cup of raisins. Also, we didn’t have any white wine open so didn’t bother with that ingredient. However, it was delicious just the same and definitely a keeper.