I love cashews, Matt is quite fond of them too, so the other day I staggered to Bulkville to get some and a normal amount of sugar. The smallest my grocery sells is 2 Kg of sugar. Ridiculous. Their cashews are also quite pricey. Anyway, Bulkville only had raw cashews so I bought a ton of them and then this afternoon I roasted them. I used a little oil and a lot of black pepper. Delicious. In fact I can't believe how good they are, better than any I have ever bought. I am having trouble leaving them alone.

Staggering how much money has already been donated to the fund for the repair of Notre Dame de Paris. $700 million is the latest figure I have heard. Wonderful how people are stepping up to the plate. Mind you I have also heard that the repairs will cost billions. Apparently it cost £36.5 million to repair Windsor Castle which burned in 1992. It was initially feared it would cost a lot more, but that was a long time ago. I have heard people, who surprisingly, could not watch the TV broadcasts last night including the doctor who saw me this afternoon.

Talking of whom, he was a delightful man. Spends a lot of time in England which made us favourites of his. Second doctor at this hospital who feels this way. He says I now have VIP status. He also said to Matt I was a cracker and really appeared to take a liking to the pair of us. The research as to my anaemia source is now under way. We took a ride from the local Community Access group and rode with a guy we knew who used to work at our grocery store. Have ridden with him before. It was raining today and I understand it will continue to do so for a day or two. When he picked us up he managed to park under the canopy so we stayed dry, very thoughtful.

I have an email from Food and Wine which details six underrated cuts of meat but doesn't give any recipes. Some of the cuts look good, but I will have to some hunting.

My very good friend, ladydog, whom you will remember from when I was sick last year, is back in Canada today. She, being a Phillistine, does NOT like asparagus, but she does love corn on the cob, so specially for her, here is a recipe. By the way, I like corn too.

Corn on the Cob with Orange Tarragon and Basil Butter

Nothing says summer like fresh corn on the cob. Here is a favorite flavor combo for buttering them 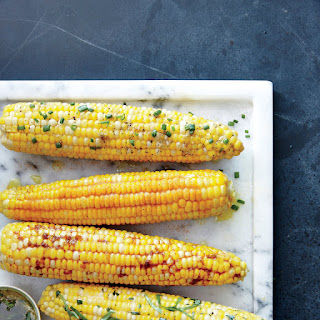 1. Bring 8 cups water to a boil in a large stockpot. Add corn to pan; cover and cook 3 minutes or until crisp-tender. Drain.