Had to go out again on Thursday, Matt had run out of gin, horrors, and we had run out of bulbs for our chandelier and one blew this morning. They really do make one hell of a noise. The Medigas people who rented us a toilet seat lifter and a walker finally came to pick them up. Odd company. They are brilliant about bringing stuff on time, but they don't seem to care too much about collecting things when people have finished with them.

It was pretty cold out, I had another word in mind there. It was windy and therefore not nice at all. When we came back the Area Co-ordinator was just coming into the building and she had a nice warm woolly hat on. Never thought of it before, but I guess she has lots of clients in this building. She is one of the many who visited me particularly when I was first home and convalescing. I feel lonely now, nobody comes to see me except the physiotherapist, and she doesn't come often any more.

I cooked the Scallops Parisienne for supper and they were very good. We had two huge scallops each. More would have been better but I guess that is being greedy. Meals on Wheels came today,  I thought they were not coming as they had delivered two frozen meals on Monday.  Maybe we will both have one of their lunches tomorrow. For Saturday, I have a roast in the freezer which I don't remember buying. Must have been just before I was taken ill. It's quite big too. On second thoughts, I would like to get some frozen Yorkshire Puddings. Too lazy to make them any more and the frozen ones are excellent. So maybe I will do the roast the following weekend. Will have to ponder on that. Of course it is New Year's Eve next Monday. Not sure what I will do for that.

Here's a nice simple shrimp dish. The pictures on the web site make me salivate. At least she doesn't leave the tails on. Serves 3, hmmm, think it would serve 2 in this home. 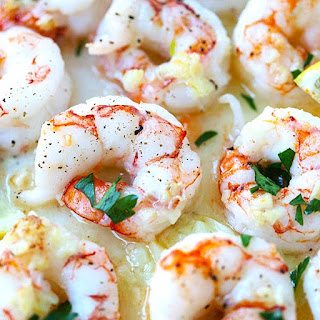 1. Set oven to Broil setting. Transfer the shrimp to a baking dish and season with salt and ground black pepper.

2. Add the minced garlic and butter to the shrimp, stir to mix well.

3. Broil the shrimp for about 8 minutes, or until they are cooked. Remove from oven, topped with chopped parsley and serve immediately with lemon wedges.