Took one of our friends to lunch at the Red Lobster today as a small thank you for all she did whilst I was in hospital. We all three decided to really treat ourselves so had the Ultimate Feast.

Friend chose a slightly different version which had lobster mac and cheese in it. Matt suddenly realised at the end that he wasn't really into eating crab legs so I was kind and helped him out!! As usual my main complaint, the shrimp in the middle were in a sauce and had their tails on. The ones on the left had their tails on too but they were dry. The red dipping sauce was slightly spicy too and I ate it OK. Excellent lunch. Matt and I had a Chocolate Wave Cake to bring home and as it normally comes with ice cream, we ate the ice cream there. They decorated it with chocolate sauce and, something not done before, they sent us home a little pot of chocolate sauce too. Yummy.

Afterwards, we picked up groceries. I had, as usual, ordered on line and one of the things I ordered was a whole beef tenderloin which was on sale for $32 reduced by $33. (Not sure how long this link will last) When I got there, I received a shock, the beef tenderloin I had was $86. I sent it back. The butcher apparently said he had never heard of a tenderloin at this price - my friend was going to buy one as well. Then she suggested we split the $86 tenderloin which would give us both quite a lot of meat. So when we got home, that's what we did and whilst at it, she cut my half into steaks etc. Once she had gone, I double checked the web page and the acknowledgement of order from the store. In both cases, the tenderloin was still listed at that price. I then decided to phone the store manager and complain. He too had never heard of this price nor had he seen the web site. However, he offered me vouchers for the difference so I was happy with that. Angie, who is the manager of the Click and Collect department, brought them in on her way home. She also took pix of the web page with the offer as they had not seen it. Anyway, I ended up with quite a chunk of tenderloin for a very reasonable price plus a bunch of vouchers to use on my next order.

My friend was telling me she planned to go see the movie of The Nutcracker danced by the Bolshoi Ballet next weekend, said I wouldn't mind going.

I just read an article about washing avocados and thought, how unnecessary. I was wrong, apparently the skin can hold a lot of germs and such which can get into the flesh when you cut the flesh. Never thought of that. Not had an avocado in a while, I do enjoy them.

I am stealing from Closet Kitchen by Kevin Lynch once again. This looks fabulous and just what I would enjoy. Doesn't it look delicious. 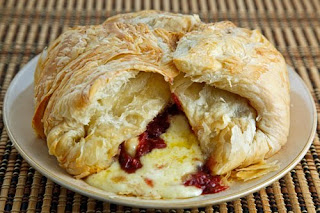