I guess I didn't check properly, and it appears that what I was watching on Tuesday evening was Part 2 of Hidden Killers of the Victorian Home. Which I am adding here.

With the result that what I was talking about in my blog yesterday was detailed in this segment today showing the adulteration of food and the deaths of children through Bovine TB in milk.

So then on Wednesday night we watched Nova which was all about climate change and how it affects our weather and the research scientists having been doing on the problems. There is absolutely no doubt our burning of fossil fuels has fueled (pun not intended) the problems the earth is facing and they explained it really well. Not something I will try and do, but they explained how the melting ice has already increased sea levels and showed coastal towns in the US which are subject to regular flooding and showed the Maldive Islands which are losing land rapidly and being regularly flooded too - islands which are likely to disappear before too long. They have proved that the earth changes regularly over the centuries, but that the current heating up period has been badly exacerbated by us. The Polar ice caps are disappearing rapidly and the oceans are warming up. The implication was that it isn't too late to reverse the trend but something has to be done now. My one consolation about how we are ruining our home is that I won't be here long enough to see the total devastation we are bringing down on ourselves.

In light of the recent recall of millions of eggs, I came across this article from Extra Crispy which answers the question "what is Salmonellay anyway?" I have not heard of a similar recall in Canada so I hope our eggs are OK.

Although these are vegetarian, I thought they looked quite delicious. I hope you do too.

We all love a classic twice-baked potato. Why not put a more nutritious spin on the side dish by swapping in sweet potatoes and adding protein-packed black beans? When topped with creamy avocado and crunchy toasted pepitas, each of these potatoes can stand alone as a main—that both the kids and adults will devour. We opted for Pepper Jack cheese to add some heat, but anyone not a fan 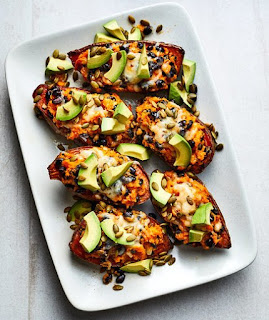 of spicy can swap in Monterey Jack or Cheddar. Broiling the potato skins before filling them with the sweet potato mixture crisps them up so they can serve as a sturdy base.

4. Add black beans, a few grinds pepper, 1 cup of the cheese, and remaining 1 teaspoon salt to sweet potato flesh and stir to combine. Divide mixture among skins and top with remaining ½ cup cheese. Return to oven and broil until cheese is melted, 2 to 3 minutes. Top with avocado and pepitas.