Regarding recycling old/used batteries. I have found this site which has a lot of useful information. The consensus here seems to be "wrap 'em up" before you toss them.

Well I wrote a load of stuff which seems to have disappeared. I was saying we had been watching some interesting programmes on our local Public TV the first is a series about building a castle in France using the methods and materials which were used in the 1300's. They are all dressed appropriately too. There is a TV crew from England who are taking part in several weeks of  the building and it is fascinating to realise that the stone ruins we so often see in Europe were actually quite different when they were occupied.

After that programme we saw another on the rise of Egypt beginning at the cave etchings of a very primitive people found in what, today, is desert but in the days of the etchings was a land of trees and grasses on which aurochs could feed and be hunted. There is a surprising amount of land which used to be fertile and contain lakes which are now arid deserts.

Being Monday we bowled today and, although I started with a fairly good game, the other two were pathetic. My average went down a point. Matt didn't bowl well either. We were on our own as our team mates had bowled ahead. We did manage to take 4 points, maybe even 5, I will find out later.

I have just found me a new motto "I'm in pain all the time, and if I gave into it then I'd do nothing." Bernard Cornwell.  I found this in Viveka's blog, My Guilty Pleasures and felt it was appropriate for me and others I know.

I have saved this recipe to try maybe this week. It is a Cooking Light recommendation for a lighter meal than a taco. I don't think I would discard the garlic but then I love eating garlic.

Flavorful as a taco truck, but healthy enough to become part of your regular rotation. We keep calories in check by blending a mixture of higher calorie (but oh-so-flavorful) Mexican-style chorizo with leaner ground pork for the meat filling. And then we keep it light by tucking the filling into sweet, fresh butter lettuce leaves—like a cross between a taco and a lettuce wrap. The quick-pickled carrots and jalapeños add authentic taco-truck flavor. Be sure to use fresh Mexican-style chorizo 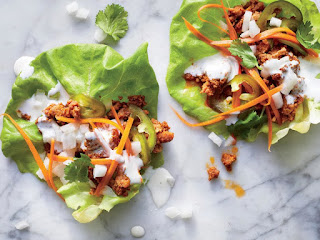 sausage (found near other refrigerated bulk sausages) instead of dry-cured Spanish-style chorizo.