I have been learning more about Egypt over the last few weeks. First there was the film about 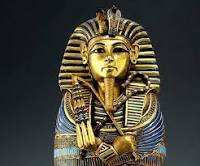 Howard Carter and his discovery of the tomb of King Tutenkhamun, then there is the series "The Story of Egypt" which is showing on Sunday evenings on TV Ontario - Professor Joann Fletcher is exploring Egypt and it's rises and falls. Something I learned last night, most of the grave robbing was done by the priests who wanted/needed the gold in the royal tombs so the mummies were unwrapped, stripped of anything of value, re wrapped in linen and then all basically chucked in a heap. Fortunately they did not find Tutenkhamun's tomb. Then it turns out that this tomb's priceless treasures were probably not for him at all but from other regalia. For instance the golden mask, with which we are all familiar, has pierced ears which has led them to believe that the original mask was made for Nefertiti and then re worked for Tutenkhamun.

I was thinking just how pernicious Facebook is. I try not to go there too often but every so often I either need to contact someone or a message comes through and once I get there and do what I have to do, I find myself going down the page checking on what people are saying at the moment. Three hours later.... an exaggeration, but it is so easy to get caught.

On Sunday I phoned the farm where I buy fresh asparagus. The snow is beginning to clear and today the weather was quite warm and sunny. It even reached 18°C. The farmer said to call back around May 5 or keep an eye on their Facebook page. Today he posted a picture of the rhubarb just poking its head up through the straw. A year is such a long time to wait. People were wearing shorts today and Matt didn't wear a jacket. I teased the bowling alley owner that someone else had gone into shorts before he had. He is always first and last each season. My bowling, by the way, was appalling. I didn't reach my average once. Mind you I was aching somewhat more than usual, don't know if that made a difference.

I'm always on the lookout for something different for breakfast and this recipe fills the bill. 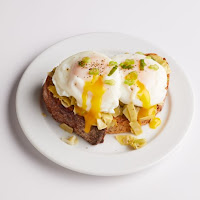 For a Mediterranean-inspired breakfast, serve up fried or poached eggs on top of sautéed artichokes and toast. If you can't find frozen, be sure to rinse canned artichoke hearts well—they're saltier than
frozen. Serve with hot sauce on the side, if desired.

1. Heat oil in a small skillet. Add artichoke hearts, scallion, oregano and pepper; sauté until hot. Spread on toast and top with eggs.