Yesterday it was sand, today it is Kim Jong-Un. A comment was made yesterday that the dredgers should take the sand from North Korea and maybe it would disappear. It seems to me the US has got enough disasters to cope with at the moment without having threats from that idiot. Not sure who said it, but they said he was "begging for war". Seems like it doesn't it?  If we end up with a nuclear war we may not have to bother with the shortage of sand or anything else. Is he really such a fool?

I got a message today asking me to pray for Texas. I don't think that will help much now. It's donations they need. And there is another hurricane likely to hit Florida and/or the east coast of the US. Irma is already a Category 4. The emergency services will be stretched to the limit if this one hits. God help America.

Today we go back to our 'home' alley and I am wondering how I will do on the wooden lanes, albeit totally redone, after the synthetics where I bowled so well. Our senior's league doesn't start til the 11th as being a Monday league, we have to miss Labour Day.

I saw this recipe  over the weekend and liked the look of it so will try it out tonight I think. I have to buy a few things, I'm out of mushrooms and have no asiago cheese although I do have Parmesan. Kevin Lynch comes up with some excellent recipes, but I am not sure he ever worries about calorie content on any of them,

Chicken and Mushroom Skillet in a Creamy Asiago and Mustard Sauce

Quick and easy chicken and mushrooms in a creamy asiago and dijon mustard sauce. 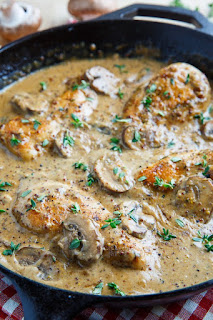 1. Heat the oil in a heavy bottomed skillet over medium-hight heat, season the chicken with salt and pepper to taste, add them to the pan and cook until golden brown on both sides, about 4-6 minutes per side, before setting aside.

3. Mix in the garlic and thyme and cook, until fragrant, about 30 seconds.

4. Add the wine and deglaze the pan.

5. Add the broth and cream, mix in the mustards, season with salt and pepper to taste, add the chicken, bring to a boil and simmer until the sauce thickens, about 5 minutes.

6. Mix in the asiago and let it melt, remove from heat and enjoy!

8. Option: Cook the mushrooms longer, until the start to caramelize, for even more flavour.

9. Option: Add 1 tablespoon white miso paste by mixing some of the hot pan sauce into the miso in a bowl before mixing it back into the pan sauce just after you remove it from the heat.

10. Option: Season with soy sauce instead of salt or miso.