I have groused about it before, but on the weekend Bon Appétit came up with 75 weeknight dinners. Do they really think people are going to plough through 75 suggestions unless, like me, they are searching for recipes to share. Another email I got contained snacks for football weekends, there were dozens of them. I never did get to the end any more than I got through the 75 recipes. Maybe I am just lazy, but I can't imagine anyone, with a busy life, work, kids etc. etc. would bother to go through so many recipes. 24 hours after writing this, I get another email offering 100 lunches!!!!

My first bowling for the league went pretty well. Had two good games and one moderate. I was quite pleased. Being the first day, I won't find out how many points we gained until we go in on Thursday. Update: We are lying 2nd. I hope we can stay up there. Thursday bowling went well too and the alley owner gave me a bunch of rhubarb from his garden as a birthday present. Yum. Tonight we go to the Red Lobster which I understand has a Shrimp Fest running. More yum although the shrimp here is not as tasty as the ones we got straight from the sea in North Carolina.

Tuesday was my free lunch at Mandarin. It also coincides with the Moon Festival this month which is celebrated mid Autumn during a time of moon watching. Of course, this means Moon Cake which I really love and which nobody else seems to enjoy.  The bit in the middle of the cake represents the moon. The cakes are predominantly made with lotus seed paste and are very sweet. I am giving you a recipe but I know I would never make it, and I don't suppose any of you would either. I ate plenty of it for lunch together with a lot of other specials just prepared for the Moon Festival. They had some Korean chicken which was delicious.

Wednesday morning I felt absolutely lousy. Ended up going to bed for the rest of the morning but by lunchtime was starting to feel OK. No idea what the problem was.

So we went to the Red Lobster for supper and I ordered the Seaport Lobster and Shrimp, but I

couldn't get the local pic so ended up with the US pic. The only difference, I didn't get broccoli, I did get rice. Matt had Blackened Arctic Char. I had been very tempted to have the Arctic Char myself as it is one of my favourite fish. I forgot, being a creature of decision I decided to get some Chocolate Wave Cake to go home. However, Matt got some to eat there so I changed my mind. Ate a lot of it and then changed my mind and took the rest home. It is so delicious. Not only that I ate two of their biscuits too - really a birthday is no excuse.

I have been writing this email in bits and pieces all week, so if the timings seem a tad off, sorry about that.

A step by step guide for making mooncake, a traditional Chinese dessert typically eaten during the Mid-Autumn Festival for good luck. 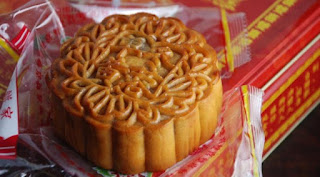 1. FOR THE DOUGH
2. To prepare the Chinese mooncake dough use a large bowl, mix the golden syrup, alkaline water and oil well. Sift in the flour. Use a spatula to combine all the ingredients. Don’t over–stir. Knead into a dough. Cover with film wrap and rest for 40 minutes.

3. Mix egg yolks with wine. If the salted egg yolks are homemade and freshly broken from the shells, you’ll see the egg whites turn opaque after mixing with the wine a few minutes later. Wipe the yolks dry with kitchen paper. Cut each into two halves. Set aside. Roll the lotus paste into a long tube.

5. Roll each portion into a ball shape. Set aside and preheat the oven to 180°C.

6. FOR THE EGG WASH
7. Whisk the egg yolk with the egg white. Sift through a fine sieve.

8. FOR THE FILLING
9. Divide the dough into 12 equal portions. Roll each portion into a small ball shape. Cover a dough portion with a plastic film and roll into a thin disc. Then take a lotus paste ball and poke a hole in the middle with your finger.

10. Place the egg yolk inside and roll and shape into a ball. Wrap and seal the lotus paste ball with the dough disc.

12. Repeat this step to finish the remaining dough and lotus paste.

13. Bake in the preheated oven for about 10 to 12 minutes. Brush the mooncakes with egg wash, at about five minutes, before removing from the oven. Continue to bake until the pastry turns golden brown. Remove from oven and leave to cool on a wire rack. Store in an air–tight container. The pastry will become soft and shiny in one or two days: the mooncake recipe is ready to be enjoyed.