Isn't it odd how things connect? I told Matt that there was a programme about Nubia on TV tonight. Later I looked at  Bob Scotney's Sunday Stamps blog and there was a picture of an Egyptian headdress. I wondered if it was gold. I then wondered where the pharaohs got their gold so I googled and discovered a lot of it came from Nubia. Coincidence or what? I am not 100% sure but I don't think Nubia, as a country, exists any more I guess I will find out more by watching the programme. The Egyptians sure used a lot of gold, most of us know the gold items found in the tomb of King Tutenkhamun. Funny I never thought about Egyptian gold before. I missed a chance to see the funerary items of King Tut when they were in Philadelphia. I think they had them in Toronto shortly after we first got to Canada but we were too busy settling in.

I enjoyed the programme about Nubia, it was interesting, but then I watched a programme which shocked me to the core. It was called The Sand Wars and was about the fact that billions of tons of

sand are used in construction and many other instances, but construction is the main usage. It turns out that because there is insufficient sand they are now dredging it from under the sea. This causes the sand surrounding land to slip away in order to fill in the empty spaces. Not only is sand being dredged, but all the marine life in the area is also being sucked up and obviously killed. In many instances the sand is being dredged illegally because there is such a demand for it and there is a Sand Mafia - it is very big business. However, islands are disappearing because of this sand dredging and on the coasts beaches are also disappearing. It isn't just erosion that is doing it but the dredging of billions of tons of sea floor. No, they cannot use sand from the Sahara, the Gobi or any other desert because it is the wrong kind of sand. Because it is constantly blown about by the wind, the grains are round and will not stick together. I was horrified by the information in this programme and it is something very few people know anything about. Beaches are being rebuilt by dredging sand and pumping it onto them, but this doesn't last more than a year so it is done again, meanwhile the areas off the beaches are being damaged and the sand from the beaches is being sucked back into the holes. Not only that, pumping tons of sand onto the beaches is killing off the critters that live in the sand and are not prepared to cope with such an inundation of sand. You can watch the trailer of Sand Wars which might give you some idea of the problem. It is something everyone should do something about particularly when the oceans are rising making the problem even worse. I wish I could get everyone to see the whole programme. I kept thinking of all the concrete being used on our balconies!! Actually a drop in the bucket.

Potato salad is the quintessential dish for any gathering. At least in North Carolina it certainly was and also it appears regularly in Ontario too. I have never been much on potato salad, possibly because to me potatoes don't taste as good as they did in Europe. Some of the best potatoes I ever tasted were in Malta. Just as well I don't live there. However, when this picture appeared in my inbox it did make me think yum, so I thought I would share it with you. This is a very Germanic version of potato salad.

Egg salad and potato salad: Unite! We like how the still-soft yolks dress the salad, but you can cook 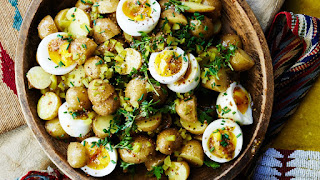 the eggs a minute or two longer if you like them more set.

1. Steam potatoes, covered, in a metal steamer basket set in a large pot over boiling water until tender, 20–30 minutes, depending on size. Transfer to a plate and let cool.

2. Meanwhile, cook eggs in a large saucepan of boiling water until whites are set and yolks are still slightly soft, 7 minutes. Drain; transfer eggs to a bowl of ice water and chill until cold. Drain and peel; set eggs aside.

3. Toast mustard seeds in a dry small skillet over medium-low heat, tossing constantly, until seeds start to pop, about 1 minute. Transfer to a small bowl (be ready with bowl; once seeds get going, it’s chaos).

5. Halve potatoes and add to bowl with vinaigrette. Add parsley and toss to coat; season with salt and pepper. Transfer to a platter. Halve reserved eggs and tuck in between potatoes. Drizzle with reserved vinaigrette. Top with pickles, chives, and toasted mustard seeds.

Tips
Eggs can be boiled 1 day ahead; drain, cover, and chill. Peel just before using. Vinaigrette can be made 3 days ahead; cover and chill.