Boy does that ever make me feel old, today as I am writing, it is June 6 and I didn't realise until I read it somewhere, it is the 73rd anniversary of D-Day (1944). I should have written this post ready for it being published on June 6. Most of you who read this will not have been born at that time. Mind you, I wasn't old enough to know what was happening and remember nothing about it. I think Matt does but then a) he is a little older and b) I lived further north and c) he lived in Kent which is where a lot of the preparations for the Normandy landings were happening. Like assembling all the tanks and other military vehicles which were under camouflage. In other places there were cardboard tanks, etc. which from the air looked like the real thing. One of the best movies about this day was "The Longest Day" - just occurred to me, why don't I have a copy of that? I just bought one.

We have just, thanks to PBS, discovered Jonas Kaufmann the German opera singer. I cannot

understand why we had never heard of him before, he has made lots of CDs and we both love to listen to a good tenor. What a voice. The programme we watched was all about his love of Italy and, of course, included him singing many arias with which we were familiar. Plus he sang Volare and something else which is not from opera but I can't remember what. One thing he didn't sing, which we both love, is Nessun Dorma which was a favourite of Pavarotti's so I just ordered a CD of him singing it. No, I haven't had a windfall, just gone a bit nuts that's all.

Well, now I have seen everything, Roasted Asparagus with Mushroom Poutine!!! I have never tried Poutine I admit, but for me it has several strikes against it, I am not a big fan of gravy in the first place and I like my French Fries crisp not soggy. As for ruining asparagus with gravy I cannot imagine it except with a shudder. Yes I know, many people love gravy on all kinds of things and I do make gravy when I make a roast but it is not the thick brown stuff which is most familiar to everyone. I understand that Poutine is now considered a Canadian national dish. What a thing to be known for.

Monday night we watched Kew on a Plate again and this is one of the recipes which were made. At the end are the modifications I made for supper tonight.

A beloved classic of Belgian cooking; this is a simple, rustic family dish. The Comté cheese can be 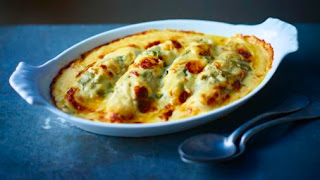 replaced by any British cheese. And, of course, omit the ham for a vegetarian version.

1. For the chicory, put it in a medium saucepan and add the lemon juice, sugar, salt, peppercorns and enough water to barely cover. Place on a medium heat and cover with a circle of baking paper and a lid smaller than the diameter of the pan (this is to keep the chicory submerged). Bring to the boil, then simmer for 45–60 minutes. It is important to cook the chicory slowly to remove most of its bitterness.

2. Lift the chicory onto a wire rack to drain and cool. Once cool, gently press out any extra moisture with a tea towel.

4. For the chard, put the butter and 100ml/3½fl oz water in a saucepan on a high heat. Cook the stalks for 20 minutes, adding more water if necessary. Once tender, lift them out and cook the leaves for 3 minutes in the same water. Strain, mix the stalks and leaves and arrange in a small gratin dish.

5. Meanwhile, make the cheese sauce. In a small saucepan on a medium heat, melt the butter. Add the flour, whisk until smooth and cook to a nutty blonde colour. Take the pan off the heat, whisk in the milk and return to the heat. Cook for at least 4 minutes, stirring constantly with the whisk until the sauce thickens.

6. Add the cheese and mustard and cook for 3 minutes, stirring, until the cheese has fully melted. Remove from the heat, taste and season if required.

7. To assemble the gratin, fold the ham slices in half and arrange one chicory head on each slice. Pack tightly in the gratin dish on top of the chard. Spoon over the cheese sauce and sprinkle with the remaining cheese. Bake in the top of the oven for 25 minutes until golden-brown.

I decided to change the chard for asparagus (surprise?)  I didn't use Comté cheese but Cheddar, on the TV he added an egg yolk to the cheese sauce too but not shown in the recipe.