Well, they are getting close, ton Thursday they started working on the other side of our wing, i.e. the apartments across the corridor from us. I wonder how long they will take now. They seem to be working differently this year and leaving the new walls til the very last. 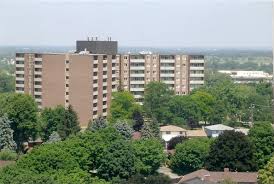 Our building is Y shaped and in this picture we are on the left, the extreme left is the back of the building. The apartments on the right have all been done, they were the first.

Matt exchanged phone calls with his two daughters on Sunday - they had sent cards earlier of course. As for us, we spent Father's Day the same way we spend all our Sundays. Both of us wishing we could bowl on Monday but of course, we can't do that until September. At least I can go to exercise class, I just wish I could persuade Matt to do so as well, it does me a lot of good.

Having announced, on Saturday, that we were having lamb chops for supper, I changed my mind. I had forgotten we had bought some pork tenderloins at Costco the other day, so that is what I decided to cook. I found the following recipe and it turned out very well. Matt couldn't stop praising it. We had enough left over for another meal including the excellent, if somewhat calorie laden, sauce. I used the mustard I wrote about last week which I had bought at the asparagus farm, it is mixed with horseradish already. I forgot the chives, but I don't have any anyway. I ended up with a lot of sauce too. As I said, it was delicious.

"This is a great pork recipe. Mustard is a classic with pork, but when you add the extra zing of horseradish and cayenne, and then smooth it out with a little cream and butter, well, it's devilishly 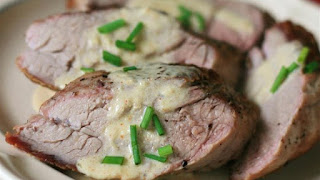 1. Heat oil in an ovenproof skillet over high heat. Cook pork until browned on one side, 3 to 4 minutes. Turn over pork and transfer the skillet to the preheated oven. Cook until pork is browned and still slightly pink in the center, 20 to 25 minutes. An instant-read thermometer inserted into the center should read at least 145 degrees F (63 degrees C). Transfer pork to a plate.

3. Remove any excess oil from the skillet and place it over medium-high heat. Pour in chicken broth and bring to a boil, scraping any browned bits off of the bottom of the pan. Whisk in cream, horseradish, Dijon mustard, and cayenne pepper. Continue cooking until the mixture is reduced to a thick sauce, 3 to 4 minutes. Remove from heat and whisk in cold butter. Stir in chives.

4. Slice pork into 1/2-inch slices and serve topped with sauce.