That was pretty amazing. On Saturday a few cyber friends got together on Google Hangouts and spoke to one another. Our coverage was from Canada (me) to Mexico (Father Dragon) stopping at Virginia and North Carolina and Texas on the way. The Ninja Captain was there too  - he has a nice voice but still don't know what he looks like LOL. I always love getting in touch with cyber friends. We may never be able to meet face to face but this is the next best thing. Before this I had never heard of Google Hangouts which I was having trouble with. For some reason my web cam wouldn't work on my desktop but in the end it worked with my laptop although there was nowhere to attach it. Even tried my tablet. I was either getting a picture and no sound or sound but no picture. Of course, modern laptops have cameras built in, but mine doesn't as it is anything but modern. Still works though.

Off the cuff I invited a friend over for dinner on Saturday night. Usually I know in advance what I am 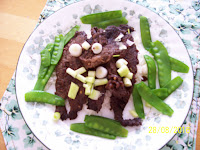 cooking for Saturday but have been humming and hawing all week. In the end I decided to do the Korean Bulgogi Beef again. We enjoyed it and I have enough flank steak for 3 or more of us so that worked out OK. Turned out well and our friend enjoyed it although she doesn't really eat enough to keep a bird alive. Maybe I should copy her. Help keep my weight down.

I have come across an article through a friend in Facebook. According to research in the UK if you drink 3 glasses of champagne a day it really helps prevent the onset of dementia or Alzheimer's. I drink champagne every Sunday but I guess I am going to have to increase it!!! I can just imagine what Matt would say about that. They are going to be testing it out on older people. I will have to go back to Britain just to get in on the study. Unless they wish to extend it to Canada.

Oops, it turns out I am guest posting on the Really Real Housewives of America this week instead of later in the month. I feel a bit bogus because I haven't been a real housewife in a long time. I have someone who comes in to clean for me these days. At least vacuuming and dusting. I just cannot manage that stuff any more. Actually, I have had a cleaner most of my life. I always remember in my 20s I lived in a two room apartment and had a woman come in to clean for me. I used to pay her half a crown an hour, peanuts today, but it was a lot to me then. However, she could afford to fly to America to see her kids, I could hardly afford to go to the local restaurant. Struck me as funny all those many years ago. My mother had a cleaner most of her married life except a period when my father was broke and we couldn't afford it. Then she worked like stink However, eventually things changed and she had a cleaner once again. I had one cleaning lady who used to come to me once we had divorced and I couldn't afford her any more and she would just come to have coffee with me and do a bit of cleaning. She was such a wonderful woman. Years later her husband said she loved me very much, I loved her too.

We both love Brie. This is a slightly different version of Baked Brie. 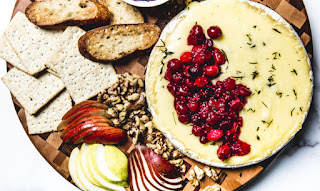 size)? Smaller wheels are perfect, and the cook time is the same.

1. Place brie on a plate and freeze until very firm, about 30 minutes.

2. Preheat oven to 350°. Cut off top rind of brie with a sharp knife (it’s okay if you can’t get the rind off in one piece; brie will smooth out as it bakes).

3. Toss rosemary, thyme, and oil on a parchment-lined rimmed baking sheet until coated. Spread herbs evenly on parchment. Place brie in the center so that it covers about half of the herbs. Bake until cheese is melted, 15–20 minutes. Remove from oven and let rest to firm up slightly, about 5 minutes (if you skip this step, you risk spilling molten cheese all over your cutting board).

4. Strip leaves from uncovered herbs and sprinkle over brie. Using parchment and a wide spatula, carefully slide brie and covered herbs onto a cutting board.

Hope you are enjoying your Labour Day holiday weekend.