Must admit I had forgotten the significance of the date on Sunday until I heard it mentioned on TV. It is one of those days one will always remember where one was and what one was doing. The same as when I heard of the assassination of President Kennedy or the death of Princess Di. On 9/11 a friend called me and told me to turn on the TV (I don't watch much TV) I did so and was shocked at the terrible accident which had cause a plane to crash into one of the twin towers. It wasn't until the second plane that I and the watching world realised it was a terrorist attack. What a dreadful day that was. Matt was out golfing with a couple of friends and didn't know anything about it until they came off the course. I, of course was glued to the TV all day.

Today being the 12th, we start our winter league bowling. It is so much better to bowl Monday and Thursday rather than Wednesday and Thursday, gives us a break in between.

Saturday we had another Google Hangouts meeting with 4 of our group. It was great fun again although some of the time was spent getting things to work right. For instance I could hear everyone but they couldn't hear me for some reason.

Tried this out for supper last night. We both enjoyed it. As I did it for supper I fried two eggs each. 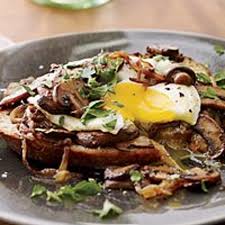 1. Preheat the oven to 400°. In a large skillet, heat the 2 tablespoons of oil until shimmering. Add the mushrooms and season with salt and pepper. Cover and cook over moderate heat, stirring a few times, until softened, 4 minutes. Add the onion, cover and cook, stirring occasionally, until the onion is softened and the mushrooms are browned, 3 minutes longer. Add the sherry and cook until almost evaporated, 1 minute. Season with salt and pepper. Remove from the heat, cover and set aside.

2. Arrange the bread slices on a large rimmed baking sheet and brush with olive oil. Bake for about 6 minutes, until toasted. Transfer the toasts to plates.

3. In a large, nonstick skillet, melt the butter over moderate heat. Crack the eggs one at a time into a ramekin and then slip into the skillet. Cook the eggs, sunny-side up, until the whites are firm and the yolks runny, about 5 minutes.

4. Spoon the mushroom mixture onto the toasts and top with the fried eggs. Garnish with the parsley and serve.

The cooked mushrooms can be refrigerated overnight. Reheat gently.