With my ISP service I get their TechXpert service too and they can take over one's computer and check out what is wrong etc. etc. which is what they were doing last night. In fact, when I checked at about 5:30 a.m. they had worked until shift end at roughly 2:30 a.m. I think. Not had any contact with anyone since, but it does seem that the things which were wrong have been fixed. It all started with lack of sound and escalated. Not sure what the problem was. I know the loaded a different driver for the sound system even though the one I had said it was the right one and up to date.


This evening we watched the last part of an Il Volo concert on PBS. They really are a fantastic group. They sing all kinds of songs not just classical Italian. The show tonight was from Pompeii and they sang Volare and Unchained Melody to name a couple. Both of those songs were popular when I was a young woman, so a loooong time ago. They appear to be popular world wide. They are going to be in concert in Buffalo on February 5, the day after Matt's birthday, but the tickets are only given out to a one time donation to WNED of $250 which is too rich for our blood, especially as we would then have to get down to Buffalo to watch it. So, I guess, CDs and DVDs are the things we have to use. I cannot believe the chubby faced young fellow, Ignacio, has turned into the young man on the right in the second picture. Pity, he was so chubby and popular there.

Smoked Salmon is one of my favourite foods, as is avocado, so this recipe appealed to me instantly. 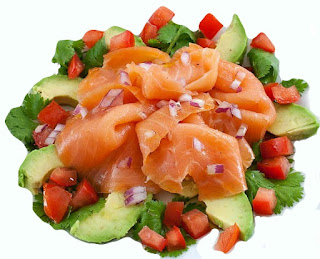 This recipe came from a local seafood shop, T & J's. I am not sure why there are no instructions. However, I think, reading it, everything would be pretty simple to throw together.