I’m not sure where my head is at the moment, I discovered late in the morning that although I had posted my Monday’s blog,  I had never checked it for format. Duuh. Then at 9:30 this evening (Monday) I suddenly realised I hadn’t written my blog for Tuesday.

My main news is that I was awarded a Jo You Rock by Alex J. Cavenaugh. I am very honoured to have been selected amongst all the people who have been selected previously and am proud to show my new badge at the side. Alex was very complimentary too. On his blog I also heard about the game Bloody Mary which I had never heard of before. I asked some Canadian friends at the bowling alley and none of them had heard of it either. It appears that if you say Bloody Mary in a dark room kids believe you will call up spirits. Sounds a tad daft to me. But kids do play some odd games the object is, apparently, to scare the you know what out of themselves.

were fed on beef with all the trimmings including jellied salad, something I will never cotton to I’m afraid. For desserts we got lemon meringue pie or apple pie. It was a very good meal. We then bowled our usual three games which, because it didn’t matter any more, I scored reasonably well. Oh, I forgot, Matt won high single with a 262. He had the sense to bowl such a high score in the league rather than on a day when it didn’t count. Many of the members of this league will not be joining us for the summer league which starts on Wednesday. They will be returning next September for our next winter league though. That starts on September 14, my birthday would you believe.

Some people seem to be enjoying the asparagus recipes according to the comments. As I also picked up some rhubarb I should look up some rhubarb recipes. Not that I do anything more than stew mine as it’s just for me. I do have a lot of recipes for it though.

One thing I always ensure that I make during asparagus season is Tim Barrie’s mom’s Asparagus Soup. I make a stack of it and then we eat it over the winter months. 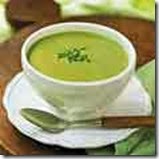 1. In a covered saucepan, boil the asparagus, onion and 1 cup of chicken broth. When the asparagus is tender and still bright green, blend to a purée (this purée can be frozen and used for future batches of soup.
2. In a large saucepan heat the butter and flour on medium to make a paste. Cook until golden. Stir occasionally as you add the 2nd cup chicken broth, making sure lumps don't form.
3. Stir in the salt, pepper, purée, milk. Bring to a boil.
4. Take soup off heat. Measure the yogurt or sour cream into a bowl and stir in spoonfuls of hot soup, little by little. Now, carefully stir this warmed yogurt or sour cream mixture back into the pan of soup.
5. Add a teaspoon of lemon juice, or to taste.
6. Serve in individual bowls, sprinkled with chopped chives.
7. (makes 3 1/2 to 4 cups of soup)