S is for Squirrel - A to Z Challenge 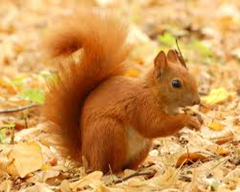 If it weren’t for their bushy tails, most of us wouldn’t think much of squirrels at all, but those tails make them look so cute. In England we have the red squirrel which has been fighting a losing battle against the introduced grey squirrel for many years. Also loss of habitat is affecting this animal. I have now discovered there is an American Red 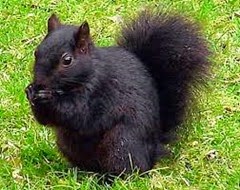 Squirrel which is not to be confused with the Asian one as their territories in no way overlap. We also have the ubiquitous grey squirrel which appears to be the dominant species and certainly in southern Ontario we have the black squirrel which I understand is actually an offshoot of the grey. It is a much prettier looking critter in my opinion. I must admit when I think of eating squirrels, I always picture the American Grey Squirrel but I guess it really doesn’t matter. I  myself have never eaten squirrel but I imagine it’s not that different to eating rabbit which I have done many times and found it delicious. I understand the Brunswick Stew was originally made with squirrel.

~ 3 squirrels, cleaned and cut up 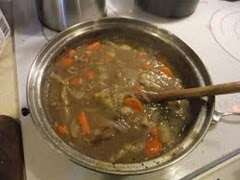 Email ThisBlogThis!Share to TwitterShare to FacebookShare to Pinterest
Labels: S is for Squirrel, Squirrel Stew