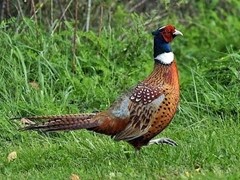 Ring necked pheasants are seen all over the US and southern Canada – the males are such colourful birds although, as often happens, the females are quite dull looking.They crow almost like roosters and the sound can be heard from a mile away. They were introduced to this part of the world from Asia in the 1880s and quickly became a very 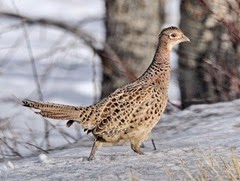 popular North American game bird. They eat seeds and waste grain predominantly although they do eat the odd insects too. There are quite a lot of birds in the family including the ordinary pheasant. I know in the UK there is a season for hunting these birds, I don’t know about in North America. Grouse is another bird which is hunted and the season always starts on the Glorious Twelfth (August 12). I don’t know why I know this so well, I’ve never hunted them in my life nor have I eaten them although I have eaten pheasant. Apparently the male pheasant also helps with the rearing of the young.

If you visit Brandon Ax you will find he is revealing the cover of his new book in the Lighbringer series. It is called Lightbringer. He also has his first two books Elemental and Ashes on sale for .99¢ each. I just bought them myself.

This recipe is one of Emeril Legasse’s which means it gets “kicked up a notch” but there are recipes which don’t do this of course. I have only ever eaten it roasted as far as I recall, and not for many years but I do remember I enjoyed it. 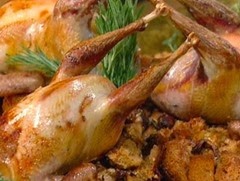 Preheat the oven to 500 degrees F and position the oven rack in the bottom third of the oven.
Season the cavities and the outside of each pheasant liberally with salt and pepper. Divide the chopped onion and carrot equally among the cavities of the pheasants. Squeeze the juice from both halves of the orange and set aside. Cut 1 of the squeezed halves into 3 pieces, and tuck inside of the cavities along with the veggies. Insert 1sprig of thyme into the cavity of each pheasant.
Arrange the pheasants in a large roasting pan, breast sides up. Lay 2 strips of bacon over the top of each pheasant, cutting the bacon into pieces if necessary to cover as much of the pheasant as possible. Roast for 15 minutes, then remove the bacon strips and continue roasting for approximately 30 to 40 minutes, or until the juices run clear. (It is important to not overcook the pheasants, as they are very lean birds.) Remove the pheasants from the oven and transfer to a serving platter, loosely tented, while you make the sauce.
Using a spoon, carefully remove as much extra fat from the pan as possible. Place the roasting pan over high heat and, when hot, deglaze with the reserved orange juice and Madeira, using a wooden spoon to scrape any brown bits from the bottom of the pan. When the orange juice and Madeira have reduced by half, add the chicken stock and continue to cook until sauce has reduced enough to coat the back of a spoon, about 3 to 4 minutes. Swirl in the butter and remove from the heat. Season, to taste, with salt and pepper.
Remove the back bone from each pheasant, then cut along the breast bone to divide the birds into two halves. Serve 1/2 pheasant per person, napped with some of the sauce and with some of the Wild Mushroom Bread Pudding.
*Note: Wild pheasants are usually smaller birds, and thus will cook in less time. If you are using wild pheasants, please adjust the recipe accordingly.

Emeril's Savory Wild Mushroom Bread Pudding:
Heat the oil in a large, deep skillet over high heat. Add the onions and cook until golden brown and tender, 5 minutes. Add the mushrooms, 1/2 teaspoon of the garlic, 1 1/2 teaspoons of the Essence, 1 teaspoon of the salt, and 3/4 teaspoon of the pepper, and cook, stirring, until the mushrooms are tender and have given off their liquid, about 5 minutes. Add the beer and cook, stirring, to deglaze the pan and until the mixture is almost dry, 1 to 2 minutes. Remove from the heat and let cool.
In a large bowl, combine the eggs, cream, molasses, Worcestershire sauce, thyme, remaining 1 1/2 teaspoons of Essence, remaining 1/2 teaspoon of salt, and remaining 1/4 teaspoon of pepper, and whisk well to combine. Add the mushroom mixture and cheeses and stir well. Add the bread cubes and let sit until the bread has absorbed the liquid, 2 hours, stirring occasionally.
Preheat the oven to 350 degrees F.
Butter a 9 by 13-inch baking dish with the butter. Add the bread crumbs, shaking to cover the bottom evenly. Pour the bread pudding mixture into the prepared pan and cover with aluminum foil. Bake for 1 hour and uncover. Continue baking until risen and firm in the center, and golden brown, 20 to 30 minutes. Remove from the oven and cool slightly before serving.

Essence (Emeril's Creole Seasoning):
Combine all ingredients thoroughly and store in an airtight jar or container.
Yield: about 2/3 cup