A is for Anchovy

The anchovy is a tiny fish – there are 144 species in 17 genera (families?) which is something I didn’t know. The following is a copy from Wikipedia. 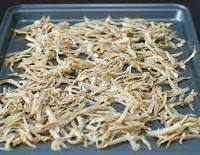 them in brine, allow them to mature, and then pack them in oil or salt. This results in a characteristic strong flavor and the flesh turns deep grey. Pickled in vinegar, as with Spanish boquerones, anchovies are milder and the flesh retains a white color. In Roman times, anchovies were the base for the fermented fish sauce garum. Garum had a sufficiently long shelf life for long-distance commerce, and was produced in industrial quantities. Anchovies were also eaten raw as an aphrodisiac. Today, they are used in small quantities to flavor many dishes. Because of the strong flavor, they are also an ingredient in several sauces and condiments, including Worcestershire sauce, Caesar salad dressing, remoulade, Gentleman's Relish, many fish sauces, and in some versions of Café de Paris butter. For domestic use, anchovy fillets are packed in oil or salt in small tins or jars, sometimes rolled around capers. Anchovy paste is a 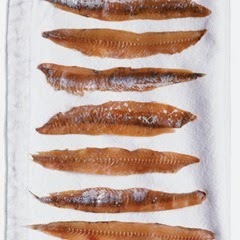 lso available. Fishermen also use anchovies as bait for larger fish, such as tuna and sea bass.

The strong taste people associate with anchovies is due to the curing process. Fresh anchovies, known in Italy as alici, have a much milder flavor. In Sweden and Finland, the name anchovies is related strongly to a traditional seasoning, hence the product "anchovies" is normally made of sprats and herring can be sold as "anchovy-spiced". Fish from the Engraulidae family are instead known as sardell in Sweden and sardelli in Finland, leading to confusion when translating recipes.

Unfortunately many people, unfamiliar with anchovies, have tried them straight out of their tins or jars and found them to be most unpleasant. With reason. They should generally NOT be eaten that way. As it says above, eaten as part of a recipe or sauce, they become a wonderful addition and even if you don’t like fish, they DON’T impart a fishy flavour to things but generally give a somewhat salty taste which can be delicious.

Matt and I love this dish and have made it many times. I call it English Peppers because it was an Englishwoman I first saw making it on TV many years ago. Do try it, I promise you won’t taste any fish. In fact I usually add a bit more anchovy. 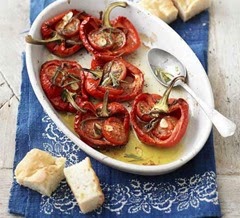 1. Cut peppers in half vertically and clean. Peel tomatoes and cut in to pieces. Stuff in to peppers. Snip one anchovy fillet per pepper half over tomatoes and add 4 slices of garlic to each pepper. Spoon olive oil over each pepper and roast for 1 hr in an oven preheated to 350F. Serve with crusty bread.

Email ThisBlogThis!Share to TwitterShare to FacebookShare to Pinterest
Labels: A is for Anchovies, English Stuffed Peppers