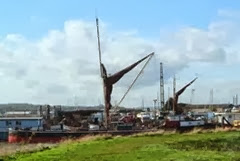 I moved to Hoo St. Werburgh when I was about 12. I don’t know precisely, and lived there until I was 20. My parents continued to live there for quite a few more years, on a Thames Barge at the Marina which my father used to run. I used to attend Christmas midnight m 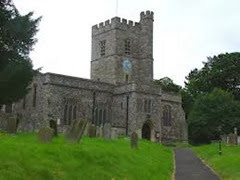 ass at the church of St. Werburgh but otherwise was not a regular church goer, however, I got married there in 1962 to my first husband. Although we didn’t live in Hoo, we eventually moved back as my husband took over the business. I have since blogged about the church, but never once did it occur to 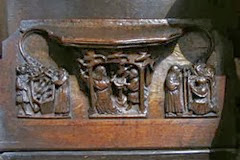 me to search for St. Werburgh. Tuesday I read Hilary’s post on Greenwich and London when she talks about the church of St. Alfege and his origins which made me wonder about St. Werburgh. Of course I then Go 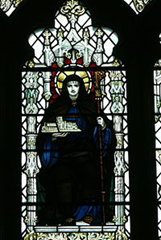 ogled and discovered much to my surprised that St. Werburgh was actually a female. Turns out she was a Saxon Princess who became a saint. She is patron saint of Chester. Apparently her family were Kings in one of the many petty kingdoms which abounded in her day. She eventually became Abbess of Ely having been a nun for many years. She was instrumental in convent reform across England. The most famous legend about her is that she restored a goose to life. She died on February 3, 708 which is, today, w

hen she is commemorated. During the Middle Ages, the badge of a basket of geese was adopted as proof of having made a pilgrimage to the Shrine of St Werburgh. Wiki have a lot more about her so do click on her link. The stained glass window is from the cathedral in Chester. The following pictures were 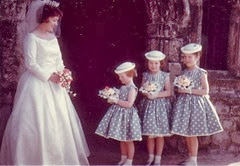 of my first wedding with us standing outside the door of St. Werburgh Church. The bridesmaids were my three cousins. Looked cute didn’t they? However, the youngest would NOT smile for the cameras.

Wednesday was snow, snow, and more snow. We had to take my gadget from hell (BP monitor) back so we went at 8:30 a.m. before the roads got impassable. The monitor hurt a lot every time it took a reading, it was really painful. Then around 7 it started beeping for no apparent reason, then it starting blowing up, stopped, blew some

more, stopped and then ended up blowing right up. That got even more painful and it did that several times. Then when I went to bed I discovered the wiring had got caught up with my bra and I couldn’t take it off. I was perplexed as to whether I should take off the cuff which I knew I couldn’t put back on on my own, or unplug the monitor. I did the latter and then, guess what, I could not re-attach the hose. I called Matt (luckily he wasn’t asleep yet) and he couldn’t do it either so eventually I took it off. I climbed into bed and then not half an hour later when I was asleep, it decided to start again. I then discovered a switch on the bottom. I had thought the switch at the top was it. Apparently it worked OK up to bedtime, whether that is enough info they will decide. I ain’t paying again, in fact I am not sure I would accept the stupid thing again. This guy looks OK doesn’t he? Later: I have an appointment to go see the specialist. Think he wants to put me on a different BP medication. I cannot seem to explain to doctors just how high my readings go when they do tests. Even when I am at home with this one, I get stressed and up tight.

Having got back home safely we decided to stay put because the snow was accumulating fast.

When this recipe landed in my inbox I couldn’t resist sharing it. After all, it’s chocolate. 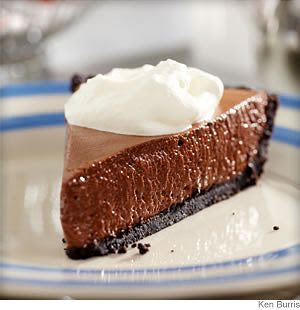 Bittersweet chocolate and Dutch-process cocoa meld with a shot of fresh brewed coffee
to give an ultra-rich flavour to this creamy French silk pie. A frothy meringue is the secret to lightening the brown sugar-sweetened filling.