I am ashamed to say I totally forgot that I was being featured at Tina's blog Life is Good this morning, I am one of Tina's minions for the A to Z Challenge, a member of Tina's Terrific Team.

Because I have to keep my feet elevated, I keep my laptop by my easy chair and I have a Wireless Mouse. I might also say my Kindle, my Android tablet and my Glucose meter are all on this table. Bit crowded you might be pardoned for saying, hubby s

ays it all the time. Saturday morning I had a glass of water on the table to take with my myriad pills and later, surprise, surprise, I caught it with my fingers and spilled water all over my poor little mouse. Luckily all the other electronic items were fine, but my mouse has given up the ghost. I have been reduced to using the built in mouse on my laptop, which I hate and usually have turned off. Whilst using it, it has a tendency to erase things I have typed. It does this at the speed of lightening so I am unable to stop it. Does lots of other unpredictable things too. It’s because I have a tendency to rest my fingers on the pad or brush it when I am typing. So I guess I have to go buy me a new mouse. Have you seen some of the prices they charge for these things? Luckily there are some inexpensive ones out there. I was going to order one on line but the shipping costs almost more than the mouse itself.

Saturday night we had a friend over for dinner and I decided to do a snow pea dish I found as a vegetable, not something I cook very often and these turned ou 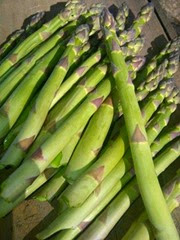 t pretty well, as a starter we had Asparagus Pesto Toasts, followed by Chicken Breasts with Lemon and Capers accompanied by Spanish Rice and the snow peas. For dessert I had bought some Cannelloni from Vincenzo’s. Our friend requested recipes for everything which is always a good sign. I only have a little Asparagus Pesto left so I will need to make some more once the season arrives. Another month at least if I am lucky.The earliest they ever opened was April 20 and the latest May 26. I hope it won’t be that late, I would have chewed my fingers to the bone. Matt already told Tim Barrie, the asparagus farmer, that I painted my fingers green and started chewing on them before the asparagus was ready. I am out of asparagus soup too and have one Asparagus/Almond soup left. Dire straits indeed. I could always go to the farm and get some pickled asparagus I guess.

As a prelude to the season and because I served it the other night, here is the recipe for Asparagus Pesto Toasts which came from the LCBO’s Food and Drink magazine. Hmm, it appears I posted this recipe last May, it is one I post every year however. If you haven’t tried it, when the fresh asparagus comes in, I highly recommend it. 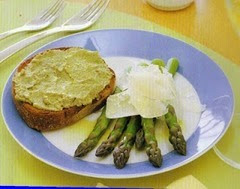 1. Cook asparagus until just tender. Refresh in cold water, then drain and dry well. Place asparagus, walnuts, garlic and salt in food  processor. Process until blended.
2. With motor running, gradually add olive oil, then add cheese and pepper. Blend together and check seasoning. Place in covered bowl.
3. It shows the recipe served on crunchy toasted French or Italian bread with a curl or two of parmesan on top and some asparagus at the side.
4. We freeze this in ice cube trays, then wrap the cubes in pairs (separated by Saran, and put in a bag in the freezer until we need them. Lasts forever.