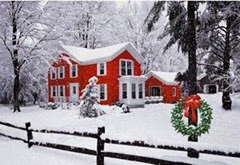 Merry Christmas to all my blogging friends and readers. Not sure if I will post over Christmas, probably not.

As I mentioned yesterday, we had a storm and a half on Sunday with the result that a lot of Ontario is in a mess. Monday morning there were still 300,000 people without power in Toronto alone, not to mention other areas. Some of these people will probably not get power again until after Christmas. I am so sorry for them, what a time for it too happen. We were really on the fringe of the storm and very lucky; however, driving to the bowling alley on Monday afternoon, I have never seen anything like it. It looked more like a hurricane had blown through. There were large tree limbs as well as dozens of smaller ones, down all over the place. Everything is still covered in ice, very pretty, but the weight of the ice is pulling trees apart like ripped cardboard. Never seen such extreme results from freezing rain before. We lost power for about 12 hours and we were really lucky that’s all that happened to us.

I took a few photos of our tree and some ornaments. Our tree which is covered in orn 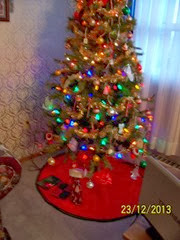 aments. I missed the top. Not much of a cameraman me. 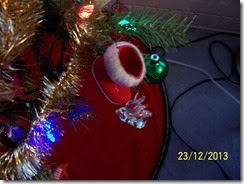 We have two of these Santa boots, hope his feet don’t get too cold. 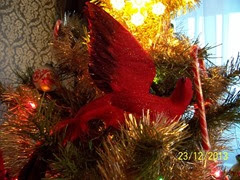 I love this big red bird, saw it in a store a few years ago and couldn’t resist. I have quite a few birds on the tree including a poor looking bird which might have been a partridge and has lost a lot of feathers, but my mother bought it years ago. 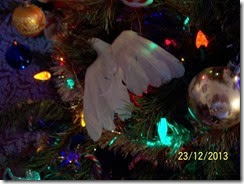 Here’s a white dove and I also have a robin. Once upon a time we had two, but it went the way of lots of things and didn’t survive many years.

I do hope you all have a Merry Christmas, we intend to. A friend in England commented that she always knew it was Christmas because of all the emails she got about how to cook turkeys or to feed 6 people on the day. Her comment was, “what do they think people do for the rest of the year?”.

For me, bowling was rough, Matt did well. However, I was somewhat touched that one of the owners had gone to the trouble of buying doughnuts for us and in particular the special ones he knew I liked. Two of them for me. Won’t do my weight much good but…. can’t very well say no, especially when he had gone to the trouble of visiting two Tim Horton’s coffee shops just to get me my favourites.

Most of you will already have your menu planned for Christmas, but here’s a Brussels Sprouts recipe from Cooking.com which I may very well try this year.

This easy side dish combines the natural sweetness of caramelized shallots with the earthiness of Brussels sprouts, a fall favourite.

DIRECTIONS
Preheat oven to 375 degrees F.
Peel shallots, leaving the root ends intact so they'll hold together. Place on a large sheet of foil; sprinkle 1 tablespoon oil over the top. Seal the packet and bake until the shallots are tender, about 45 minutes. Remove from foil and set aside to cool.
Meanwhile, remove the outer leaves from Brussels sprouts and trim the stems. Cut the small sprouts in half and quarter the larger ones. Place the shallots and Brussels sprouts in a roasting pan. Toss with the remaining 1 tablespoon oil and salt.
Increase oven temperature to 400 degrees F. Roast, tossing twice during cooking, until the Brussels sprouts are tender and lightly browned, 25 to 35 minutes.

Merry Christmas to all.