y 2 hour laptop battery last 2 hours? It really is frustrating and I would hate to have to rely on it when I wasn’t in a position to charge my battery. I recently saw an ad for a laptop of some kind with a 9 hr. battery, mind you the unit was about $1,000, but I bet even that doesn’t last a full 9 hours. Laptop batteries are pretty expensive on their own, I did think of getting a spare battery until I looked at the prices. A friend used to talk about going home by train and watching a movie – I wouldn’t think my battery would last long enough.

Watching GMA the other day they had a segment about high heels and just how bad they really are for women. In fact they can apparently cause heart attacks which seems a little extreme but it was well documented. Now I have come across an article by WebMD talking 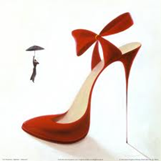 about the health risks of high heels which I thought you might be interested in reading. Although a man was trying them out on TV, obviously this article is predominantly directed towards women. I used to wear very high heels, for the time, when I was younger, those were about 3 inches, but these days they have gone to the extreme and women are basically walking on tiptoe. I don’t wear heels any more; I certainly wouldn’t like to try these. I once got my heel caught in a manhole cover, I think these would be even more prone to something like that. They used to complain about floor damage when I was younger, something like a ton of pressure is exerted on the heel, I wonder if it’s the same with these modern shoes or does all the pressure go to the toes. A friend of mine has a name for shoes like the ones in the picture, she calls them “Come f..k me shoes”.

bout an entirely unknown one, khat. Apparently a detector dog named Rusty sniffed 60 kg. of the plant at Toronto airport. It is a substance grown in the Horn of Africa which is chewed to release an amphetamine like substance. Rusty got

some good doggy treats for his success. I can’t honestly say it looks very appealing, I certainly wouldn’t want to chew this even if I wanted a drug.  I don’t know what breed Rusty is, I thought Labradors were the main breed for drug detection. Obviously not.

I just read something about the first time someone had pizza. For me that was in Paris when I was about 18. My French boyfriend of the time, I was staying with his family, took me to a r

estaurant, I have no idea if it was pizza only, and ordered one – I hated it. I didn’t tell him that of course, but I really didn’t like the flavours at all. Nothing like the pizza here which, in my opinion, are overloaded with things, you can keep your pepperoni. Until you have had a genuine Italian pizza, you haven’t lived. I think the second time I ate pizza was in Sicily when my cousin and I meandered down a street buying small pizzas to eat and then buying ice creams, then back to pizzas. Those I loved. I think the first time there were too many olives and at that age I hadn’t really developed a taste for them. I also like anchovies on my pizza but I have rarely come across anyone in North America who enjoys anchovies. Most people seem to ha

ve tried them on their own and found them way too salt. Well they are, but added to something else they give a delicious flavour. There is a recipe I often make which I saw on TV made by an Englishwoman. I don’t know what they were called, but I call them English Stuffed Peppers, the recipe uses anchovies and I have, on occasion, given them to people who profess not to like anchovies, and they have enjoyed the peppers very much even when realising what they contained. I don’t have an exact picture of the finished recipe but the one below is very similar. Ooh, now I’m hungry for stuffed peppers. 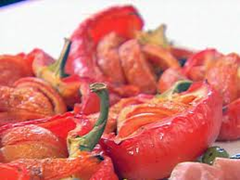 1. Cut peppers in half vertically and clean. Peel tomatoes and cut in to pieces. Stuff in to peppers. Snip one anchovy fillet per pepper half over tomatoes and add 4 slices of garlic to each pepper. Spoon olive oil over each pepper and roast for 1 hr in an oven preheated to 350F. Serve with crusty bread.