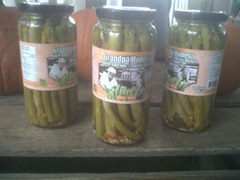 I know, its not the season yet, and some of you get sick of the way I carry on about asparagus when it is in season. The other day Tim Barrie of Barrie’s Asparagus Farm and Country Market posted a picture of his pickled asparagus with a label in homage to his grandfather who used to have 100 acres of asparagus. (Wonder how long it would take me to get through that?) So I thought I would share the picture with you. I love their pickled asparagus, its absolutely delicious. If I had the equipment I would try making it myself, but I have never had stuff for canning. When I canned tomatoes in the States I used to borrow from a friend. 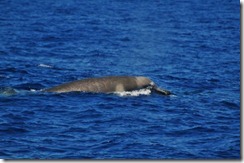 Beaked Whale which is an almost unknown animal. The first confirmed sighting was in 1937 and there have only been three confirmed sightings of this whale. Scientists know little about this whale which apparently lives deep and rarely appears. This pod was discovered of the coast of Victoria, in Australia, and is the first video ever recorded of this reclusive animal. Naturally, scientists are very excited. Previously they had been thought to be loners and seeing them in a pod of 10 or 12 has given them new insight. They have no idea how many of these whales exist. The article and video are well worth a read.

As usual, Wolfgang Puck was interviewed about the food he is providing for the 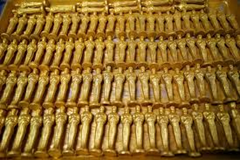 Governor’s Ball this year. Apparently it will all be hors d’oeuvres or finger foods this year, no sit down dinner. Two of the things he is serving are macaroni and cheese with truffles and chicken pot pie with truffles. Sorry, even with truffles, those two dishes do not fit my idea of a luxury meal. Neither dish is something I eat much at any time and certainly wouldn’t want to on such an occasion. What I would like to get hold of are some of the chocolate Oscars. A bunch of school kids on GMA were given one apiece yesterday, I want, I want. Apparently they are covered in edible gold.

One of the regular emails I get is called Recipe du Jour. Yesterday, Rich Rowand, one of the owners, wrote the following:

videos, and such as I'm sure many of you also do. I received the following from him yesterday and wanted to share it with you:
(In 2010) "British film director Sir Ridley Scott launched a global film making contest for aspiring directors. It's titled "Tell It Your Way". There were over 600 entries. The film could be no longer than three minutes, contain only six lines of narrative, and must be a compelling story. The winner was "Porcelain Unicorn" from American director Keegan Wilcox."
http://www.porcelainunicorn.com/

Do watch the movie, it is extremely powerful and worth seeing.

Hmm, I have just seen part of Barbara Walters’ programme about cosmetic surgery and there was a segment about an 84 yr. old female executive who decided to have breast implants in order to still be competitive in the business world. 84???? She was so pleased she has had several facial surgeries since. Incredible. A girl I used to know had her the skin round her eyes done for much the same reason and I know that cost $15,000 – a) is it really worth it and b) you have to have money anyway.

I got this recipe from 50Plus.com and thought it would be a useful addition to my recipe collection.

(NC)—Using a jar of store bought curry paste gives authentic flavour to this easy dinner. Adjust the spice level as you make it or substitute hot for the mild if you prefer. 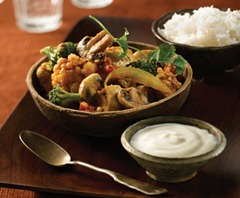 In large deep non–stick saucepan heat oil over medium–high heat. Add onion and stir–fry 2–3 minutes and then add mushrooms and stir–fry for 3–4 minutes or until lightly browned. Stir in garlic, 3 tbsp (45 mL) curry paste and cinnamon; then add quartered chicken thighs and stir–fry 2–3 minutes. Stir in tomatoes with juice; cover and reduce heat to medium–low and cook about 10 minutes. Taste and stir in more curry if desired. Add broccoli or cauliflower and lentils; bring to boil, cover and cook about 3–5 minutes or until broccoli is crisp –tender. Stir in cilantro and serve topped with a dollop of yogurt. Accompany it with naan bread or basmati rice.

• Any leftovers can be reheated and rolled up in a warm roti or whole wheat tortilla.

• Fresh coriander, used in Indian cooking is the same herb as cilantro, which is the Latin American name for it.

• To preserve the bright green colour of the broccoli you could microwave or steam on the stove separately and then stir into the curry at the end of cooking time.