Did you know Apple is Chinese owned? I surely didn’t. Bill Weir of Good Morning America and Nightline has recently visited some of their plants in China: they work long hours 6 days a week for very poor pay. Because some of their workers have

recently committed suicide, the owners, Foxconn, have decided to open up a bit. They recently gave their workers a 1¢ raise. You really should read the article. It is too late to recommend you watch Nightline as it was last night. Mentioned this to a friend and she didn’t seem surprised because so many things are outsourced these days. The problem is the condition in which these things are made. One of the workers Bill Weir saw had never seen a finished iPod although she spends her days making such things. I knew a lot of IT was outsourced, but once again my naivety is showing, because I didn’t know how much manufacturing is outsourced nor that Apple is Chinese now. I missed Nightline, but did see a report on another programme – Bill Weir talked to one worker who spent 12 hours a day smoothing out the apple on the iPads where the logo had been stamped out, her rate of pay is $2/hr.

starring Sir Anthony Hopkins about a guy called Burt Munro from New Zealand who managed to get to the Bonneville Flats in Utah to do a time trial for his Indian motor cycle. A fascinating story and after the movie ended it said he went back again to Bonneville 9 times and his record still stands today. I hadn’t intended to watch the movie but I am so glad I did. Sir Anthony was brilliant, absolutely great acting. Munro was quite an incredible guy and seemed to attract friends and help wherever he went. Most of the film he spent sleeping in his car as he had little or no money. He managed to get assistance in some places, starting with a transvestite receptionist in a motel, an old girl along the highway who had lost her husband 12 years before and wanted a cuddle and then a whole bunch of people when he got to the Bonneville Flats. Wonderful story.

This evening I am planning to go see The Iron Lady with a friend. Meryl Streep playing Margaret Thatcher. I hope its good. I don’t understand why the distribution has been so limited. One friend in France who has seen the movie, didn’t think much of it, I hope I disagree with her.

This recipe appeared in my Inbox yesterday as something for Mardi Gras, didn’t give anyone much time, but I will probably try it with my NC shrimp. Sounds pretty good.

An updated and untraditional rémoulade makes a tangy sauce for these spice-rubbed shrimp. While this is a warm-weather favorite on the grill, you can also cook the shrimp under a preheated broiler. Cook shrimp on a lightly sprayed broiler 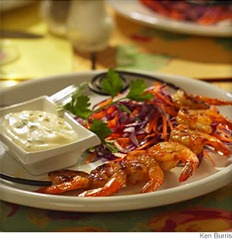 rack, about 4 inches from the heat, for a winter warmer any night of the week.