To start this blog I would remind you that we will be off on vacation tomorrow so for the next two weeks, I am not sure what blogs will emerge if any. Last year I think I managed them every day, but you never know. Please don’t forget me if I don’t publish for a while. At least this cottage has Wifi, the other place we stay does not so I have to go to the realtor’s office to access the internet.

Funny one, an elk,  munching on fermenting apples, got drunk and  then, desperate for one more apple, got stuck in a tree and had to be rescued. After

wards it lay on the ground until it recovered the next morning, somewhat hung over they reckon. This happened in Sweden. Read here its such a funny story, apparently they are used to drunken elk in Sweden at this time of the year. They figured this one had been on an all day bender, it must have felt terrible the next day.

convenience store dressed as a Gumby. Of course, I had no idea what a Gumby was or what it looked like so I Googled. See the picture; apparently it was an American TV show. The costume included heavy gloves and when the clerk of the store thought it was a joke, the robber tried to pull out a gun to wave it in the clerk’s face, the gloves caused him to fumble and be unable to get his gun so he ended up running out of the store empty handed together with his accomplice.

Heard on the news – there is a fungus destroying Cavendish bananas which is the fruit we normally eat. Read this blog by Becky Streipe which gives a good picture of what is happening. Apparently scientists are racing to genetically engineer a Cavendish banana which will withstand the blight. This fungus is not yet rife in South America where most of our imports come from, but scientists figure it will soon affect their crops too. This will upset me personally as we both eat a banana every day.

Oops, we were watching President Obama’s speech last night and at the end the news people announced a current terrorist threat, I didn’t catch it all, but it was something to do with trucks for suicide bombings and 3 terrorists having entered the US 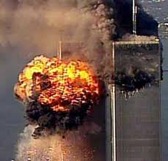 in August. Then it suddenly occurred to us, with all the extra security in place because this is the 10th anniversary of 9/11 we may have quite a long delay  crossing the border on Saturday. Mind you the US has been expecting something to happen on 9/11 ever since the first event but the terrorists work on a different time schedule it seems. Anyway we are hoping against hope we won’t be sitting at the border for too long. I guess none of us will forget that day, once a friend phoned me about the first plane, which we thought was an  accident, I was glued to the TV for ages whilst the whole attack unfolded. Lets hope they won’t decide to attack on this anniversary.

Here’s something a bit different, I have reprinted the whole article as I think it is interesting.

By The Nourished Kitchen
WebMD Recipe from Foodily.com

There’s something about wild mushrooms and dishes made from them like wild mushroom butter, something faintly alarming and decidedly adventuresome. It’s a disquieting food, like raw milk, and it takes a certain amount of culinary fortitude to walk into the woods, scratch your way through the pine needles, the brush and slowly rotting logs to find these little treasures before returning home to cook them up for your family. And when you tell your friends that you’ve gone mushrooming, they’ll warn you: But, how do you know they’re not poisonous? I mean you could die or go on a really crazy trip, man. With fair reason, too, I mean you could get sick from wild mushrooms just as you could get sick from fresh milk or any other food, really. But here’s the crux of the issue, if you know your food, really know your food, the likelihood of becoming sick is greatly minimized and virtually non-existent.

Wild mushroom butter will keep for several months, as fat -- even butterfat -- acts as a natural preservative. It also allows us to keep and extend our meagre findings of wild mushrooms by simply acting as a flavour enhancer rather than a main course like mushroom stew. So we minced the mushrooms, combining them with local shallots and fresh thyme and whipped them into fresh butter. My intention was to serve this butter on pan-seared grass-fed rib-eye steaks, which I eventually did, but first I smeared some on a piece of whole grain sourdough herb bread. I’ll also serve wild mushroom butter melted over braised leeks or to top a bowl of creamy mushroom soup.

Melt about three tablespoons of your 1 cup of butter in a cast iron skillet over a medium flame until it begins to foam. Immediately reduce the heat to medium-low and add 1 minced shallot to the hot fat.

When the minced shallots have released their fragrance, have turned translucent, and their edges begin to caramelize, empty your bowl of minced wild mushrooms into skillet quickly and all at once so that the mushrooms sizzle in the pan and their earthy perfume fills your kitchen.

Stir the mushrooms with a wooden spoon to promote even cooking, scraping any bits that happen to adhere to the bottom of your skillet.

Sprinkle about 1 teaspoon fresh thyme leaves over your mushrooms and continue to cook for a minute or two.

Turn off the heat, and allow the seasoned butter, mushrooms, shallots, and thyme to cool for about 10 minutes.

While the mushrooms rest and cool, beat the remaining butter until soft, smooth, and easily manageable.

Spoon the seasoned fat, mushrooms, shallots, and thyme into the remaining butter and fold them together until the seasonings are well-incorporated into the fat. Use a stand mixer with a paddle attachment for greatest efficiency, but if you don’t have one, a mixing bowl and rubber spatula should suffice.

Grind a bit of white pepper into the butter as you gently fold the ingredients together.

Mould the compound butter gently over waxed paper, rolling it into a log if doing so suits you. If you’re lucky enough to find a good butter mould, use that instead.

Place it in the fridge and use it within a month or two. Fat is an excellent preservative.