We are home safe and sound after a long and thankfully, uneventful journey. When we left NC we had rain for the first hour and then the rest of the 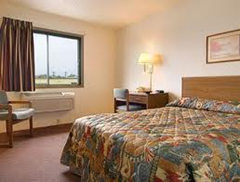 trip was dry other than the occasional sprinkle, and I do mean sprinkle. We spent the night in the Super 8 Motel in Winchester which was absolutely fine, clean, comfortable and inexpensive. Matt complained the room was a bit cramped and there were a couple of worn spots, but nothing significant. We had a complimentary breakfast which offered cereals, juice, coffee, toast, muffins, bagels, etc. As we mainly eat cereal for breakfast that was fine. It also had one very big advantage, an excellent Chinese restaurant next door. More on that later. We arrived in Canada around 4 p.m. to sunny skies and temps of 29°C which, sadly, dropped to 21° by the time we got home although the apartment was pretty warm having been closed for two weeks.

I ‘broke out’ the turkey breasts and put them in the freezer and we started doing the shrimp, mostly everything travels very well with plenty of ice and is still solid by the time we get home. This morning there is still a lot of shrimp in the freezer, in the bath.

On Saturday we were taken to Snapperz Grill and Steamer Bar which I mentioned. I shared a s 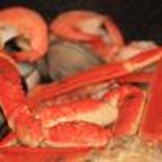 teamer pot which comprised snow crab legs, clams, shrimp, corn, sausage and potatoes (didn’t bother with the potatoes) and I really tucked in. We had drawn butter in which to dip the crab which was succulent. Thoroughly enjoyed it, will go back again when we visit once 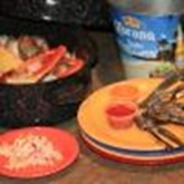 more. Matt had a chicken dish which was served over a pilaf. He was particularly impressed with the pilaf, and finished it although he was full to bursting. I finished off with a hot chocolate brownie covered in thick chocolate sauce and augmented with a couple of scoops of ice cream and a couple of dollops of whipped cream, a chocolate ganache decorating over all. Cho 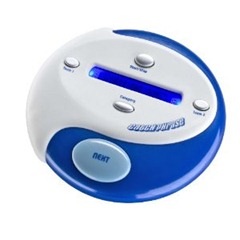 colate, what more can I say? Forgot the camera though, duuuh. Went back to friend’s home for a couple of drinks and farewells. Played a couple of rounds of a game they have called Catch Phrase, found it on Amazon.com, where else? I really enjoy the game but it isn’t Matt’s thing at all. You are given a word of phrase and you have to describe it in a certain time factor so the other players can guess the answer.

Home and finish packing and finalising everything. Next morning had to pick up the shrimp first, drop off a few remaining grocery items at a friend’s and then head off back north.

I mentioned the Chinese restaurant in Winchester, it is called Chinatown and we weren’t sure whether to try it. The hotel said customer’s liked it and a

woman leaving said their food was excellent so in we went. Their website is ‘under construction’  so not much to see there unfortunately, and once again, I didn’t have my camera. I will have to improve my record here. I started with an excellent hot an sour soup, can’t resist it, one of my favourites. Matt had Crab Rangoon, new to him, which he thoroughly enjoyed. I then had some steamed dumplings. Yum. I ordered a duck dish but they were out of duck, so I settled for a shrimp Pad Thai, yeah I know, not Chinese, they do some of both as well as some Vietnamese and have been open 25 years I discover. Matt had a beef in orange sauce dish, not sure what it was called but he loved it, I tasted a piece, great. Very un-Chinese but I finished off with a piece of very decadent chocolate cake which Matt shared.

I am not sure if this recipe is the same, but it looks very similar to what Matt ate. 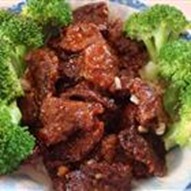 1.
Lay beef strips out in a single layer on a baking sheet lined with paper towels. Allow to dry in the refrigerator for 30 minutes. In a small bowl, mix together the sugar, rice vinegar, orange juice concentrate, salt and soy sauce. Set aside.

2.
Meanwhile, combine rice and water in a medium saucepan. Bring to a boil, then reduce heat to medium-low and simmer for 20 minutes, or until rice is tender. Add more water at the end if necessary.

3.
Heat oil in a wok over medium-high heat. Toss dried beef in cornstarch to coat. Fry in the hot oil in small batches until crispy and golden brown; set aside. Drain all of the oil from the wok except about 1 tablespoon.

4.
Add orange zest, ginger and garlic to the remaining oil, and cook briefly until fragrant. Add the soy sauce mixture to the wok, bring to a boil, and cook until thick and syrupy, about 5 minutes. Add beef, and heat through, stirring to coat. Serve immediately over steamed rice, and garnish with broccoli.