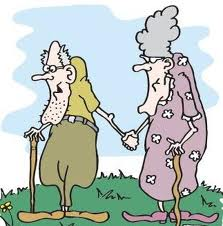 often, she assured me it was old age. Recently Matt asked her about big blotches appearing on his skin, she said it was old age. The other day a close friend had an episode where she suddenly couldn’t remember what had happened in the previous hour or so and felt unwell. She also had very high blood pressure readings. Her husband took her into the local hospital. When they eventually sent her home, with a BP reading of 211/104, they said it was old age. I am beginning to wonder whether there is any validity to this pronouncement or is it just a cop-out? My mother used to say the trouble with old age is that you don’t feel old. She’s right, well most of the time! I have written before about how people are living longer and longer all the time and many are living to a healthy old age which is the main thing. Shouldn’t this also mean that doctors don’t dismiss you as suffering from old age? Are these things really due to age or due to something else which they don’t investigate but just lump under the old age heading?

I went to see the vascular surgeon yesterday and he is happy about the results (I had an ultrasound first) as am I. He asked if my left leg gave me any bother, it doesn’t so we won’t be doing anything with it. I will apparently be getting an ultrasound once a year for the rest of my life. That didn’t happen the first time either. He was astounded there was no sign at all of the entry site, guess he did a good job. He didn’t say anything about my age!!!!!

what it was yesterday that made me think of a comedian in Britain many years ago called Cyril Fletcher who used to recite his Odd Odes, they were quite funny, so I Googled him and found this one which amused me. There are lots more of his monologues and odd odes which can be found on line. I must do some more Googling.

The tale of Cuthbert Bostril
by Cyril Fletcher

This is the tale of Cuthbert Bostril C
Who thought he'd only use one nostril
So he made himself a sort of cover
To stop him breathing through the other.
And so he wandered 'round the place
Wearing a muzzle on his face
Until he met Euphemia Muck
The barmaid at the Dog & Duck.
Euphemia loved him from the start
And told him frankly, "'Have a heart"
Remove that gadget from your clock,
In other words your nose unblock."
Ahh! such was love it made him weaken,
He took the shutter off his beak 'n'
Wedding bells rang out with Cuth'
Letting both nostrils do their stuff.
Alas, alack their bliss was short,
'Ere very long our Cuthbert thought,
He'd buy an eye-shield and then try,
To read the paper with one eye,
And then Euphemia saw with fear
He'd cotton wool stuffed in one ear,
And then he bought a sort of peg
And started walking on one leg.
So Euphemia took the only course
And being granted her divorce
Married a bloke named Arnold Stout,
What didn’t muck himself about.

Pursuing the theme of picnic foods, or at least summer items which can be served both indoors and outdoors, I used to love Marinated Broccoli, unfortunately I can no longer be able to eat it because of the grapefruit juice. Certain medications clash with grapefruit.

Dash each artificial sweetener and pepper

Combine all ingredients except lettuce in a small bowl; toss. cover and refrigerate at least 2 hours or overnight. Serve in lettuce cups.