Why don’t we have bidets in North America? Come to that, why don’t we have them in the UK? I think they are an eminently sensible part of one’s bathroom and had one installed in a

house I lived in in England. Only trouble was, the water flow wasn’t reliable and one could end up scorching or freezing oneself. I remember the first time I saw a bidet, staying with a family in France, and being sure they were foot baths until my parents disabused me when I came home. They have them in France and Portugal, that I know of, and I can’t help wondering why this extremely hygienic practice hasn’t spread. Obviously, from the picture, which I couldn’t resist, it has other uses too.

A young woman named Amy Winehouse died over the weekend, I first heard about it on Facebook and I had no idea who she was. Although I have since seen a biographical segment I still have never heard of her. Matt said he had and that when she was younger she had a wonderful voice. What a waste.

Re the Norway bombing and shootings, the reports say the gunman wanted a revolution. Not sure how he figured he could bring that about by killing something like 93 people – quite a few more wounded too. So dreadful to attack children although he doesn’t seem to have been very old himself.

oon, it is the latest in the Paksenarrion books. The last one I read was Oath of Fealty which was a few years ago, so I have problems recalling who everyone was and what they did. The principal characters OK, but some of the others, difficult. I always enjoy Elizabeth Moon’s books, one of my favourites was a stand alone called The Speed of Dark which was about autism but with a fantasy twist to it. My other favourite was a “first contact” novel Remnant Population which I bought for my Kindle so I could have a copy of it.

Sunday I made a chilled spiced Indian tomato soup which I hadn’t tried before, it is delicious and so here is the recipe. It is quite different to a regular tomato soup. 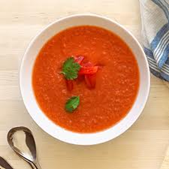 1. In a large nonstick skillet, heat oil over medium-high heat.

3. Stir in onion, garlic, and salt; reduce the heat to medium and cook until onion is softened, about 5 minutes.

4. Add tomatoes and their juices, bring to a simmer, and cook for 10 minutes.

5. Remove from the heat.

6. Cool briefly and then stir in yogurt and lime juice.

7. Transfer half of the tomato mixture to a blender and puree until smooth; pour into a large bowl.

8. Repeat with remaining tomato mixture; pour into the bowl.

9. Cover and refrigerate until chilled, about 30 minutes.