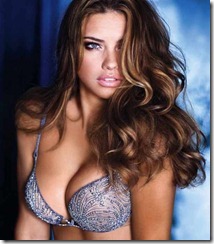 Need new bras? Victoria’s Secret have just launched this year’s $5 million bra – their jewel encrusted Fantasy Bra. They have one every year, apparently last year’s was covered in champagne diamonds but they are not being bought so they are talking about selling them for charity. This year I think its also diamonds and sapphires, I think, but I can’t find any details. I told Matt I needed new bras, but he doesn’t think I should have one like this!!! Mind you it seems they make more fuss about the model than the bra.

The other day someone described eating a Tortilla des Patatas which a Spanish woman used to make for her all the time. Made me hungry, we haven’t had one for years. Decided to make it for supper on Friday night, it was delicious. This is basically an egg dish, bit like a frittata. I will post the recipe on Monday.

I was going to post this recipe yesterday as I loved Piri-Piri when I was in Portugal, I had it at one particular restaurant where we sat outside to eat. We had made friends with a retired English guy who promoted the restaurant by handing out flyers. When I got my dish of piri-piri I said I didn’t think it was that hot (spicy) so he went into the restaurant and got me extra sauce, whooo, was that ever hot. I didn’t eat a whole lot of it, but it improved the dish 100% by just adding a small amount. Then I realised the recipe calls for a spatchcocked chicken and I wasn’t sure who would know how to do that and I didn’t have time to research. If you go to http://tinyurl.com/ylbtylp it shows exactly how to spatchcock. I’m not sure whether adding chips is a Portuguese recommendation or an English one, there seems to be a habit in the UK of having chips with everything.