On Saturday I spent time on the phone with both Samsung and Bayer talking about problems I had with my cell phone (uploading pix I had taken) and with my meter (uploading my data to the laptop) I spoke to technicians who – in the case of Samsung – said I would have to send the phone in for repair, in the case of Bayer, a technician would call back. Meanwhile, I decided to try a few other things with both machines and finally got them to work although I did lose some of the pictures I had taken. Um, why can’t the techs get me to the same place??? These are the people who are supposed to know, aren’t they? I find it very frustrating. Some  of the frustration is also caused by off shore IT help where the people I am talking to do not speak English very well. I congratulate them on the mastery of my language, but I wish someone would teach them to speak with an English (Canadian or American would do) accent. Half of these people are, to me, totally incomprehensible and I know I am not alone. There is even an ad running on TV at the moment which is based on the same kind of thing. For the longest while such calls were being outsourced to India, now the Philippines is getting in on the act and I must admit I talked to a tech from there the other day who’s English was perfectly comprehensible. He too, however, couldn’t solve my dilemma and I ended up doing so myself. Maybe I should hire out as an IT expert!!!

Also, I don’t know about you, but I am inundated by  cables. Matt said the other day that when he sees pictures of computer users on TV they aren’t festooned with cables. All I can say is, they must hide them for the pictures. Apart from all the basic connections from the CPU to various devices such as printer, monitor, speakers, modems, routers, etc. etc. I then have cables for all the o 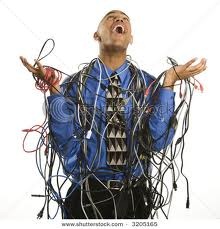 ther machines such as my Palm, my webcam, earphones, cell phone, cameras, and who knows what all. I have recently found a way to label them as I was getting confused. I still have one cable which is unlabelled as I have no clue what its for. Of course there are more cables; the power cords for the laptop and my new printer/scanner which has two cords all of its own. That picture shows just what I feel like sometimes. 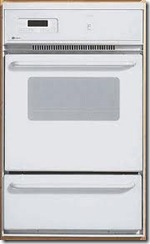 Saturday night we had the pork recipe below which Matt made. We nearly didn’t have it, Matt decided it looked too pale when it had finished cooking, so he broiled it to get a decent colour. I was busy cooking a sautéed cabbage dish on the top of the stove and I was getting choked up by the fumes coming from  the oven so Matt closed the oven door (if you are unfamiliar with North American stoves, you broil or grill inside the oven and leave the door partly open) big mistake, we ended up with a fire which then set both smoke alarms going. Luckily in the end the meat was still OK  but we didn’t have any pan juices!! I actually think it would be good with the apple drizzle. We ate the leftovers on Sunday and I am not sure I don’t prefer the dish cold. I cooked some Italian beans (tomatoes, garlic and olive oil) and it was all pretty good. 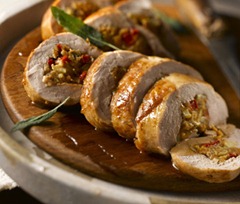 1. In medium skillet heat oil over medium high heat; sauté mushrooms, red pepper, and onion, sauté 3-4 minutes or until moisture is released from mushrooms and evaporated. Add savory, sage, salt and pepper, sauté 1 minute; remove from heat and stir in mustard and breadcrumbs. Cut tenderloins almost in half lengthwise so it opens like a book; pound to flatten slightly. Spread and lightly pack stuffing down the centre of each, leaving 1”(2.5 cm) border around the edges. Fold long edges over stuffing overlapping as necessary, and fold in the narrow end; secure with skewers or string. In large skillet heat remaining oil over medium high heat, sear both sides of tenderloins, about 5 minutes. If skillet handles are not oven proof cover with foil or transfer pork to baking pan and place in 400ºF (200ºC) oven; roast for 20-25 minutes or until juices run clear or when an instant read thermometer reads 155ºF (75ºC). Let stand covered with foil for 5-10 minutes, remove skewers or string, slice and serve fanned out on serving plates. Drizzle with pan juices or apple drizzle (below).