Good Morning America are spotlighting Alzheimer’s this week. It has always been something of a bugaboo of mine as I have relatives (not actually in my direct line except for my grandmother) who have ended up with one kind of senile dementia or another if not actually Alzheimer’s. I must admit I am not quite sure what the difference is – look it up Jo. One of the big items on which they have been focusing is care giving and the strain on the care givers themselves. I think care giving is exceptionally hard, having done it briefly when Matt has had operations, I have some idea of what its all about. Better if you are fit, but still it cuts into your life and virtually takes it over. One thing GMA emphasised this morning is finding some kind of peer group with whom you can discuss problems of every day life and also spend some relaxing time away from the patient. I’ve never looked into what kind of assistance one can expect in Ontario, but in the States where so much has to be paid for, it must be pretty stressful all round. Yesterday they said Alzheimer’s is very much more likely for women – there are many millions of women patients in the States with the disease, much higher numbers than males with Alzheimer’s – and they have discovered it is likely to start during menopause but not really develop until some 20 years later. Plus, if you are diabetic it doesn’t help. Thanks guys, just what I wanted to know. That puts me smack in the middle of the the risk category. There was a comedian in the States a few years ago, an elderly man, he used to say “Alzheimer’s is fun because you meet new people every day”!! I suppose when you have the disease you don’t really know what’s going on anyway.  OK I looked it up http://tiny.cc/yi3dr it appears dementia is a symptom and Alzheimer’s is a disease. Dementia can be caused by several things some of which can be treated. Alzheimer’s is one of the illnesses which can cause dementia. In other words you can have dementia but it is not necessarily anything to do with Alzheimer’s.

Huh, Satima described my blog in part as covering the vicissitudes of life, I guess Alzheimer’s definitely comes under that category. If you want to know more of what has been covered by GMA so far, go to http://abcnews.go.com/GMA/ where they have links to all their segments.

I am currently reading Burning Water by Mercedes Lackey. If you have ever read any of her books, in particular the Valdemar series, this is a total departure from her usual subjects. The book is not new, published in 1989, but somehow I have never come across it before nor its partners, there were three of them about a detective and a witch. This is quite a horrific story about Aztec gods and serial killing for ritual sacrifice. I am, however, very much enjoying the story. I wouldn’t have been surprised to get nightmares last night though.

For some reason Mac and Cheese is a staple dish in North America. In many cases bought in a packet made by Kraft. I have seen shopping carts piled high with such packets. Is this a sign of lazy mums or stubborn kids I wonder. Anyway, Cooking.com produced this somewhat lighter version which I thought sounded good and which, somehow, I think will taste better than that found in a packet. Having said that, I will never forget that I made custard from scratch many years ago and found it tasted just like Birds Eye custard from packets.

To wit, these individual mac-and-cheese casseroles call for pungent Parmesan and extra-sharp cheddar, which means the noodles get away with less-than-usual amounts of cheese. Low-fat milk, chicken stock, and olive oil keep the sauce creamy. 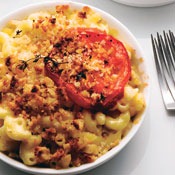 Preheat oven to 400 degrees. Spread tomatoes in a single layer on 2 rimmed baking sheets. Drizzle each sheet with 1 tablespoon oil; sprinkle each with 1/2 teaspoon thyme, and season with salt and pepper. Bake until tomatoes have softened, about 20 minutes. (Leave oven on.)

Process bread in a food processor until coarse crumbs form. Melt 1 tablespoon butter with remaining tablespoon oil in amedium skillet over medium heat. Add breadcrumbs, and toss to coat. Season with salt and pepper; set aside.

Bring a large pot of water to a boil over high heat. Add 1 tablespoon salt and the pasta. Cook pasta until almost al dente, about 5 minutes. Drain, and run under cold water to stop cooking. Transfer to a large bowl; set aside.

Put eight 4 1/2-by-1 1/4-inch ramekins on a baking sheet. Put 2 tomato slices in bottom of each ramekin. Divide macaroni mixture evenly among ramekins. Top each with a tomato slice. Sprinkle with breadcrumbs and thyme sprigs. Bake until bubbling and golden brown, about 30 minutes. Serve immediately.