Today the barbecues will be cooking merrily all over the US and celebrations will be held wherever there are Americans. Happy Independence Day to all of you out there, don't eat too much!!! I have fond memories of going to friends and not only eating burgers and hot dogs, but also shrimp and crabs. The food was great and so was the company. Then later in the evening, we would take our boats up the Sound and anchor off Swansboro, NC and watch all the fireworks from the water. I suppose as an ex pat Brit I shouldn't have celebrated, but I didn't throw tea overboard from the Mayflower when I went there. I did drink their sun tea made on deck. It was good. I just heard, this morning, that there has been a considerable cut back on fireworks this year, for economic reasons. What a pity. Don't know if you heard, they have just come across one of the original

copies of the Declaration of Independence, in London, England, of all places. In case 'original copies' sounds odd to you (did to me the first time I heard it), after the declaration was signed, they immediately made a number of copies, for distribution I imagine. The one in London is apparently worth $8 million. There is another in Middleton Place, South Carolina, which I have seen. Middleton Place is a plantation near Charleston which is open to the public - they also have a good restaurant. If you remember the movie The Patriot, starring Mel Gibson, it was Middleton Place where the scene of the British officers plotting their strategies took place. The same room which normally houses the glass case with the declaration - I wonder what they did with it whilst filming. 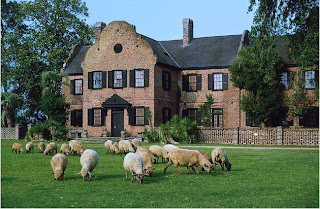 Must confess, I was more interested in the Fabergé display they had at the time we first visited. They had one of the famous eggs on almost permanent loan, but at that time they had quite a few more items by the famous jeweller which were absolutely wonderful. They also sell copies of the fabulous eggs actually made by Fabergé but not in the same materials. I have two of them. Both birthday presents. I assume things are 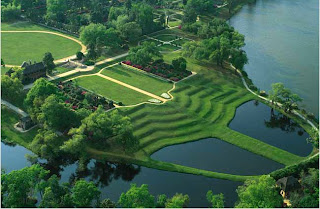 the same but not having been there for a while I couldn't be sure. The first time we went there it was so hot, I was pretty well dying and whilst walking around we came across a sheep leaning against the wall in the shade and panting. I felt so sorry for the poor animal. The lawns as shown in the pic on the right are classic to Middleton Place and best seen from the air to appreciate their design. It was the first thing I recognised in The Patriot. If you are interested here is the link to their website. Eating Well are promoting healthier eating for the 4th of July and this is a salad they have in their current recipes. Bean & Tomato Salad with Honey Vinaigrette

Makes 8 servings, about 1 cup each 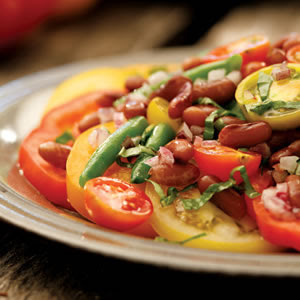 1. If using canned beans, skip to Step 3. If using dried beans, rinse and pick over for any stones, then place in a large bowl, cover with 3 inches of cold water and soak at room temperature for at least 6 hours or overnight. (Alternatively, use our quick-soak method: see Tip.) 2. Drain the soaked beans, rinse and transfer to a large saucepan. Add 6 cups cold water. Bring to a simmer, partially cover, and simmer gently, stirring once or twice, until tender but not mushy, 20 minutes to 1 hour, depending on the freshness of the dried beans. (If you’re using heirloom beans, be sure to check them after 20 minutes—they tend to cook more quickly than conventional beans.) If at any time the liquid level drops below the beans, add 1 cup water. When the beans are about three-fourths done, season with 1/2 teaspoon salt. When the beans are tender, remove from the heat and drain. 3. Combine the beans (cooked or canned), the remaining 1/2 teaspoon salt, onion, vinegar, honey, oil and pepper in a large bowl. Stir, cover and refrigerate to marinate for at least 1 hour or overnight. 4. Cook green beans in a large pot of boiling water until crisp-tender, about 5 minutes. Drain, rinse with cold water, and drain again. Pat dry and add to the marinated beans. Stir in cherry (or grape) tomatoes and basil. Season with pepper. 5. To serve, arrange tomato slices around the edge of a serving platter or shallow salad bowl and spoon the bean salad into the center.

Prepare through Step 3, cover and refrigerate for up to 1 day.

Tip: To quick-soak beans, place in a large saucepan with enough cold water to cover them by 2 inches. Bring to a boil. Boil for 2 minutes. Remove from the heat, cover and let stand for 1 hour. Proceed with Step 2. While we love the convenience of canned beans, they tend to be high in sodium. Give them a good rinse before adding to a recipe to rid them of some of their sodium (up to 35 percent) or opt for low-sodium or no-salt-added varieties. (Our recipes are analyzed with rinsed, regular canned beans.) Or, if you have the time, cook your own beans from scratch.